I purchased my first 3D Printer over the 2019 Memorial Day weekend. I’ve been researching 3D printers for over 18 months and found it difficult to choose a brand and model. I have been searching for a printer that meets specific criteria:

NOTE: This post is part of a series on 3D Printers. More posts to come.

While browsing 3D printers at Amazon, I found the Creality Ender-3 for $229 with a $40 coupon code (#ad). It met my first criteria. This was not the Ender-3 Pro. However, that model was currently more than $200 and after reading comparisons of the two, there wasn’t enough value in the Pro version to justify the extra cost. The Ender-3 also met all of my criteria. The remainder of this post will be my experience assembling the printer. It will be in journal format with times listed to give you an idea of how long each step took.

A blog post draft in Sublime Text is ready (you are reading it). Time to break open the Creality box and see what’s inside. 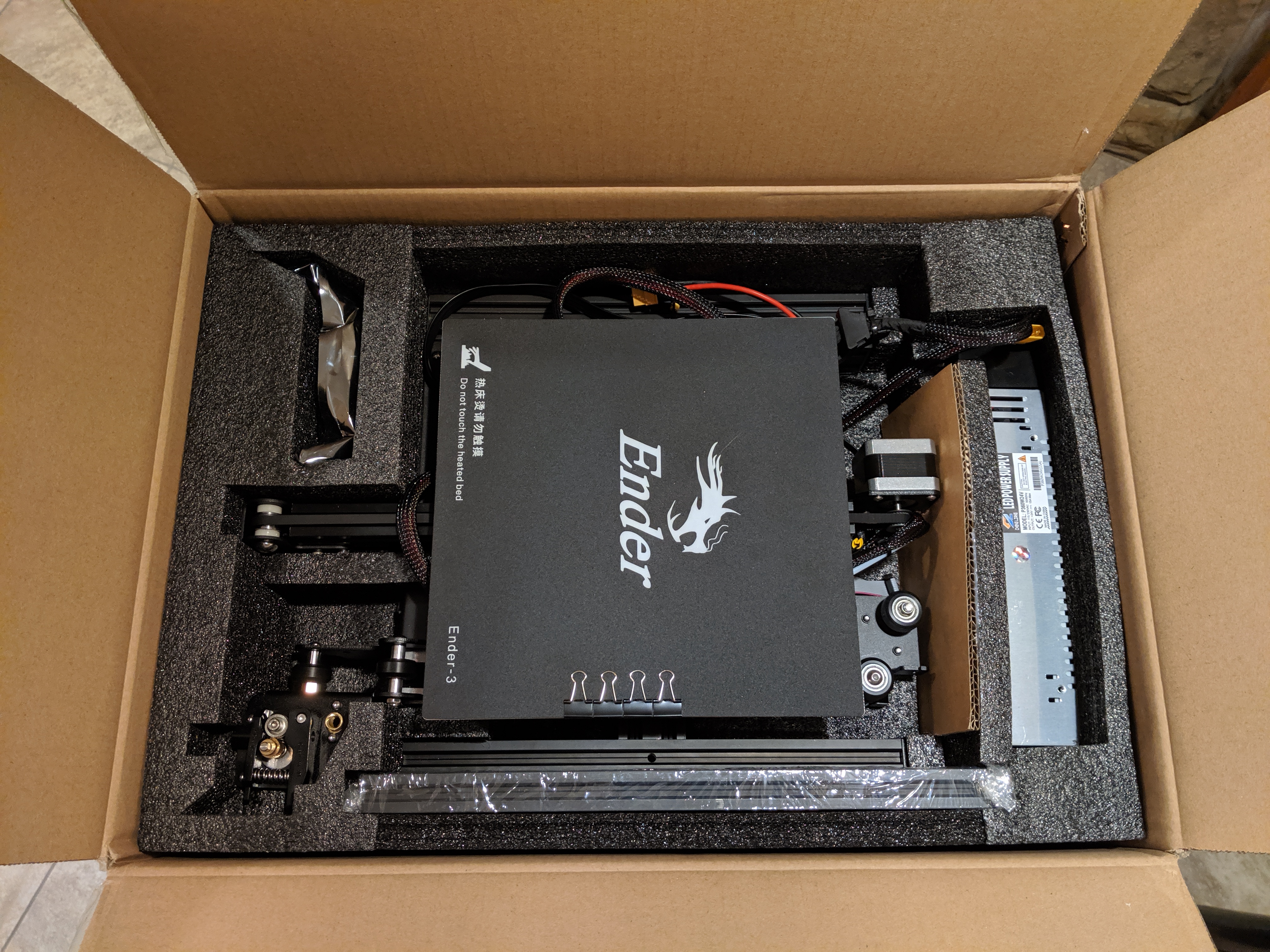 First item out of the box is poorly translated assembly instructions. Images are well done and I should be able to assemble using these instructions. If not, I’m sure there’s a YouTube video that can help {Update: Didn’t need to use any stinkin’ video}. Each item has an associated number. I will use these numbers as a reference in this post. 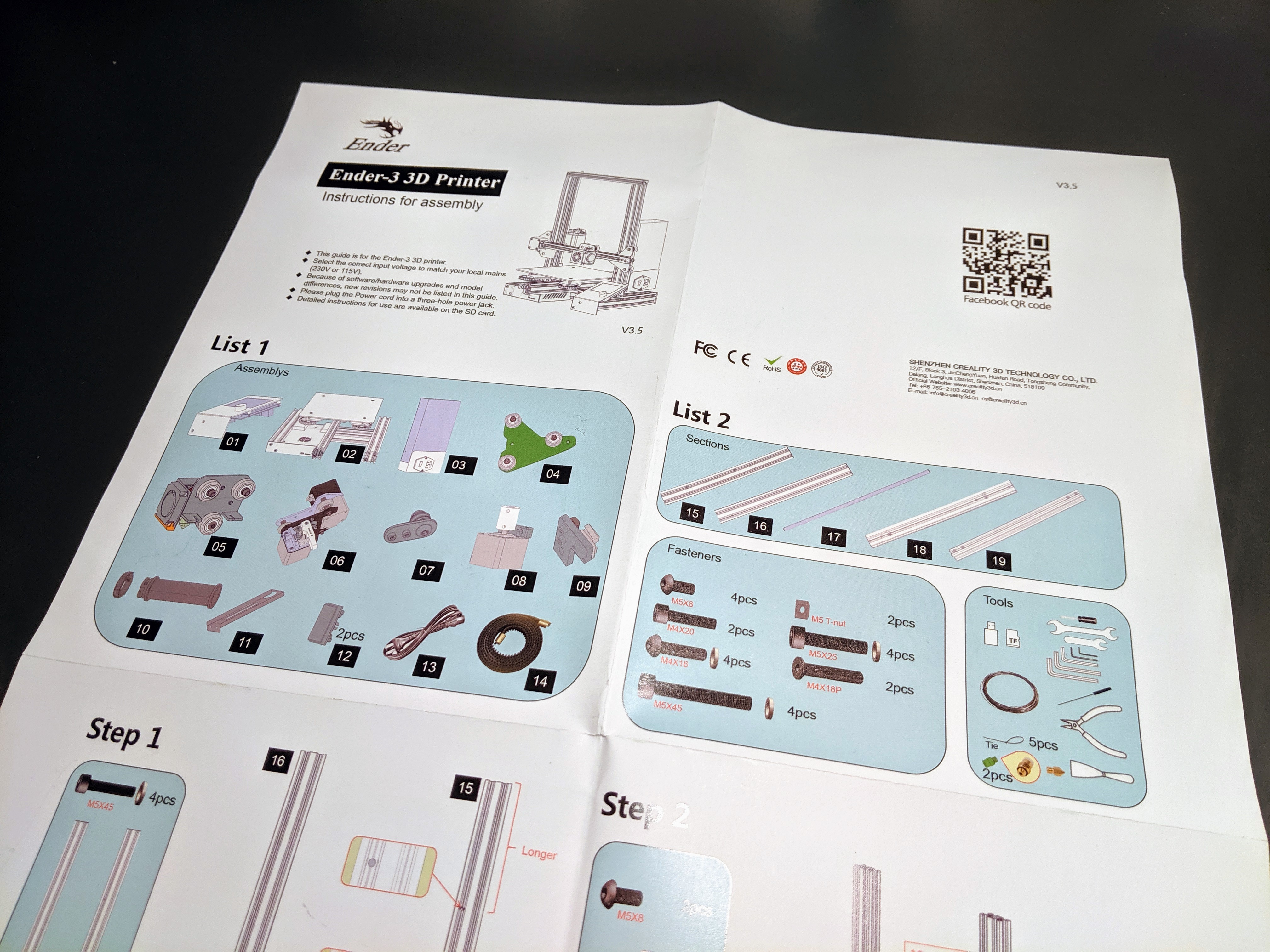 First thing I noticed, and a bit disappointing, is the Ender-3 does not include the magnetic build plate. It is removable, but is held down with the included binder clips. {Update: Online sources reveal not having the magnetic version found in the Pro pack may be a good thing. Seems heat transfer is an issue.} 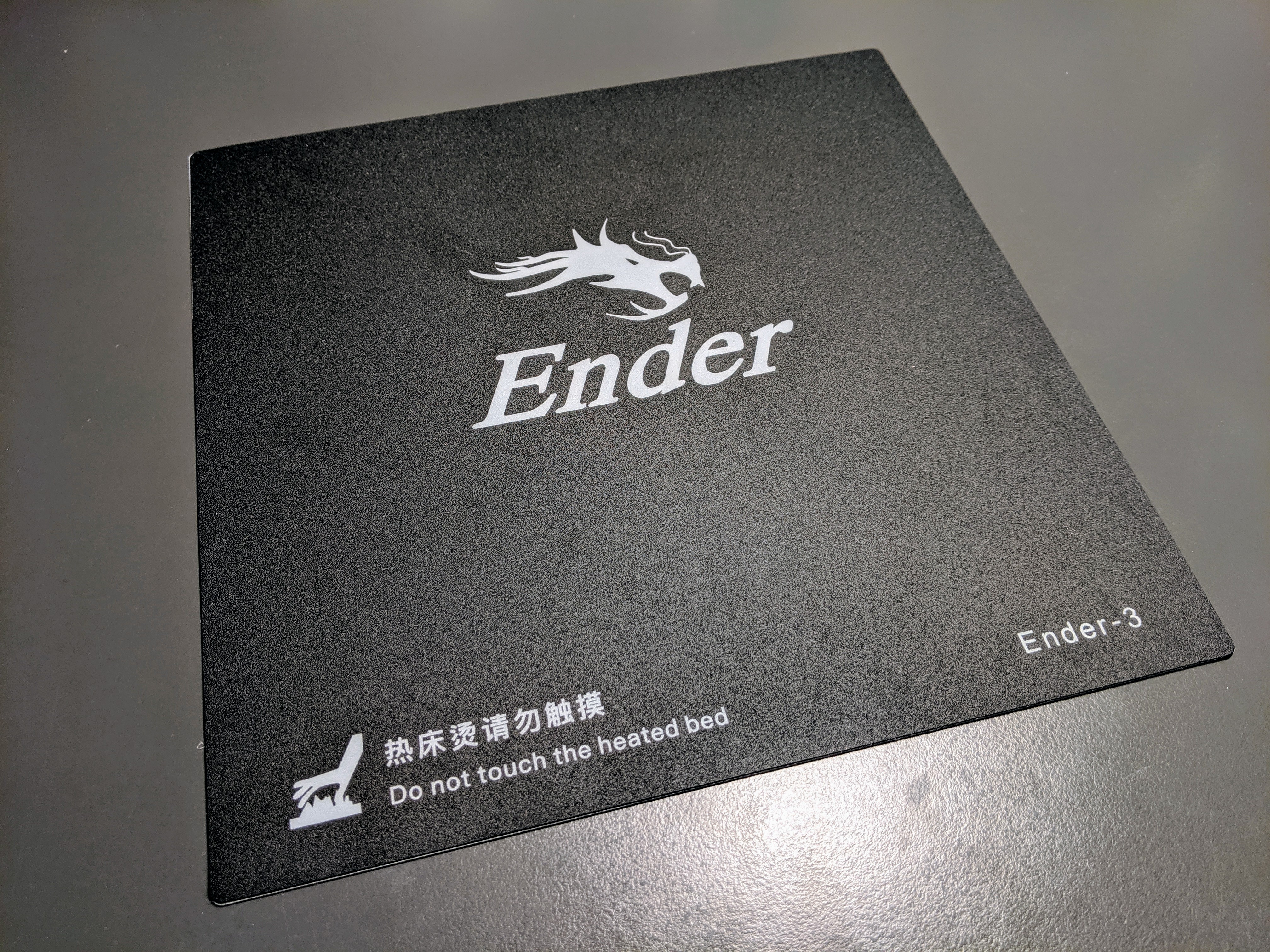 Not sure which items to pull out of the box first, so started with the printer control assembly. 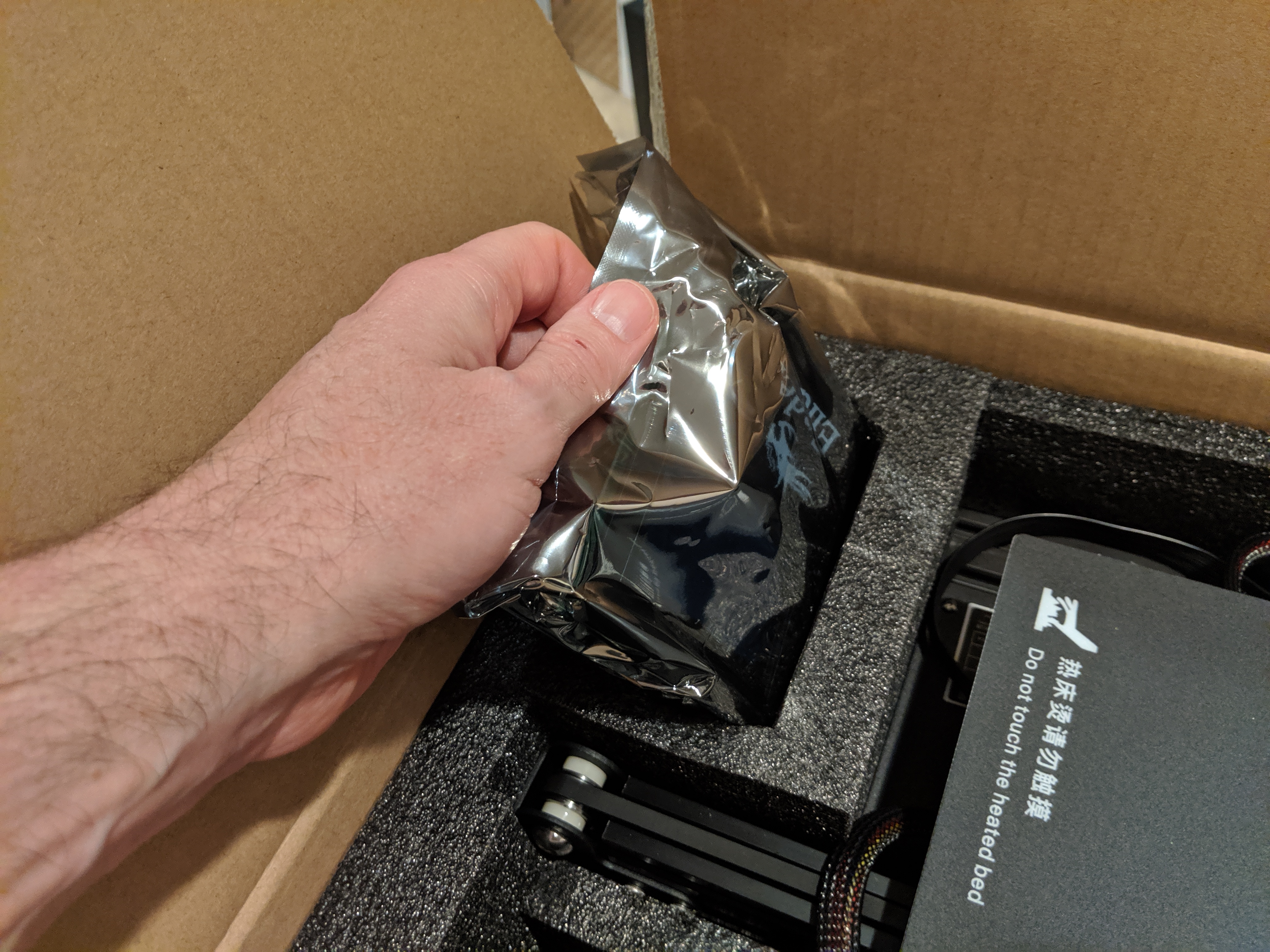 There is protective covering on the LCD panel. I’ll leave that on until the assembly is complete. All-in-all, the printer seems well packaged for shipping. I do not anticipate any shipping damage to the printer. 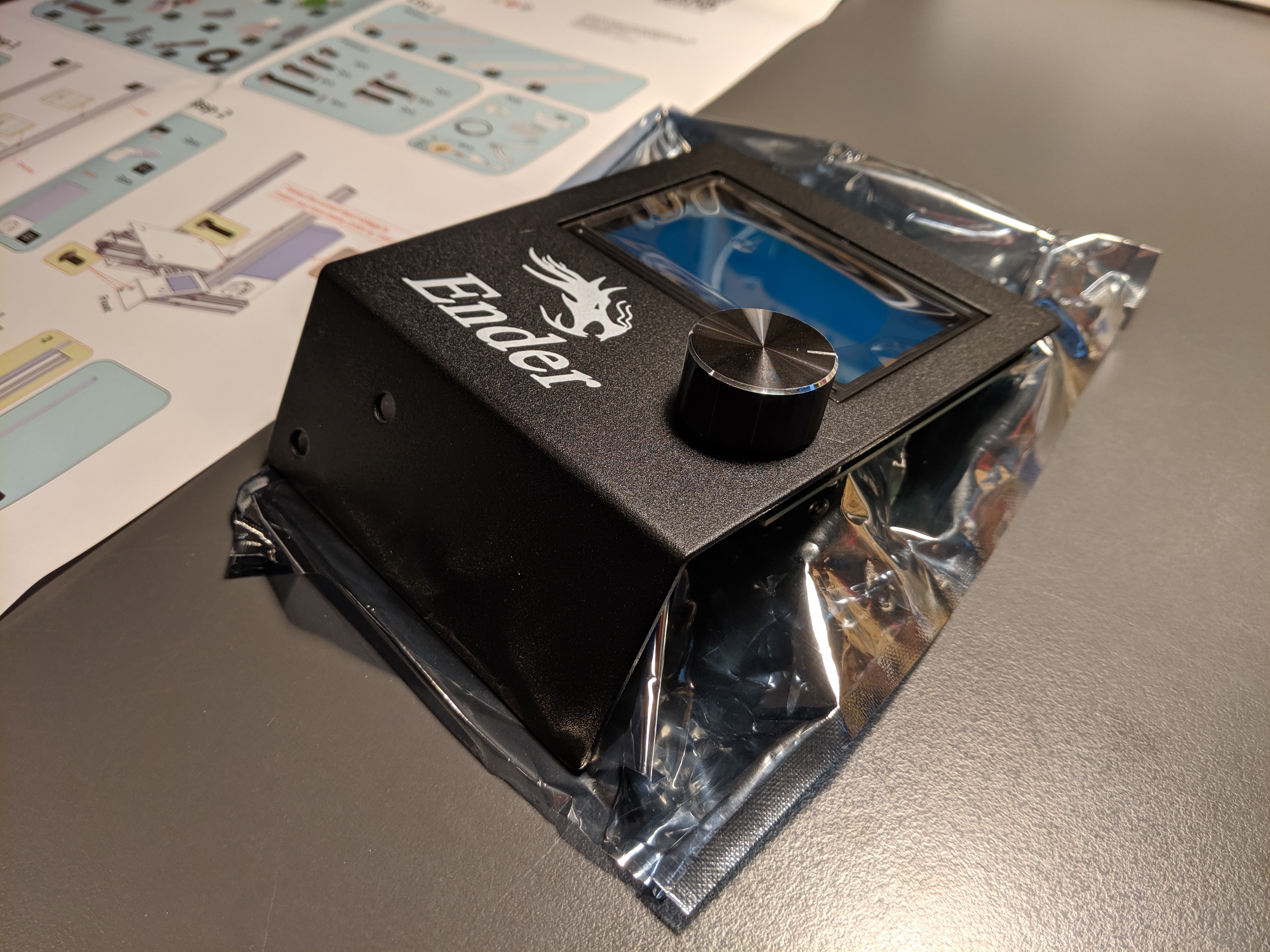 Now I’m really confused. Not sure what to take out of the box next so I am working my way around the small things first and in this order:

I removed the first layer of packaging to reveal another layer underneath. Items on the second layer include: 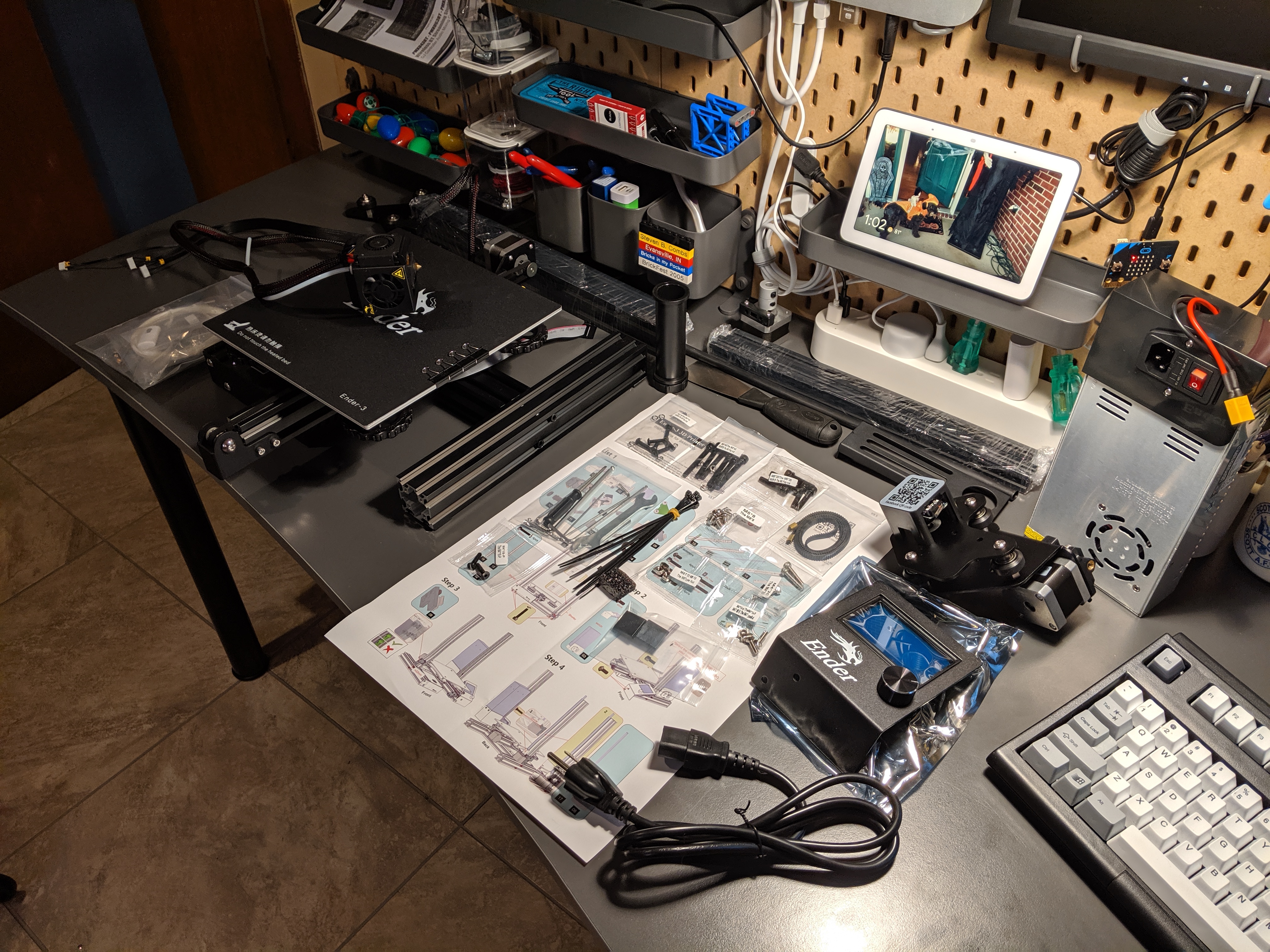 Whew! And that completes removal of all parts and cataloging. Time: 12:18. Lunch time!

Took some time to download software and firmware using my Chromebook while watching an old Kung Fu movie on my Roku Ultra (#ad). Downloaded new firmware for the Ender-3 along with Linux (appImage) and Mac (.dmg) versions of Cura, the free 3D slicing software recommended by everyone online. I have no idea how to use any of this, but looking forward to trying it out.

While downloading files, I also received a box from Amazon. This includes items to create an OctoPi to connect to the Ender-3. More on that in a future post.

For these next steps, I have tied the narrative to the step number in the PDF file provided on the microSD card. This should help you follow along if you are trying to assemble this printer. That PDF file is also linked below:

{Update: The day after, I found another PDF file that included English text next to each image! That would have been helpful.}

Time to begin assembly. Glad I found those instructions on the included miroSD. The included tools are put to use immediately.

Right off the bat! I put the wrong vertical support on the wrong side. Didn’t look to see that they were different. Will make note of this as I now remove said support and put it on the correct side! AND, I didn’t even install the lock washers. It’s going to be a long install.

I asked my Google Home Hub to play some calming music (Cinemix on TuneIn). That seems to be helping. 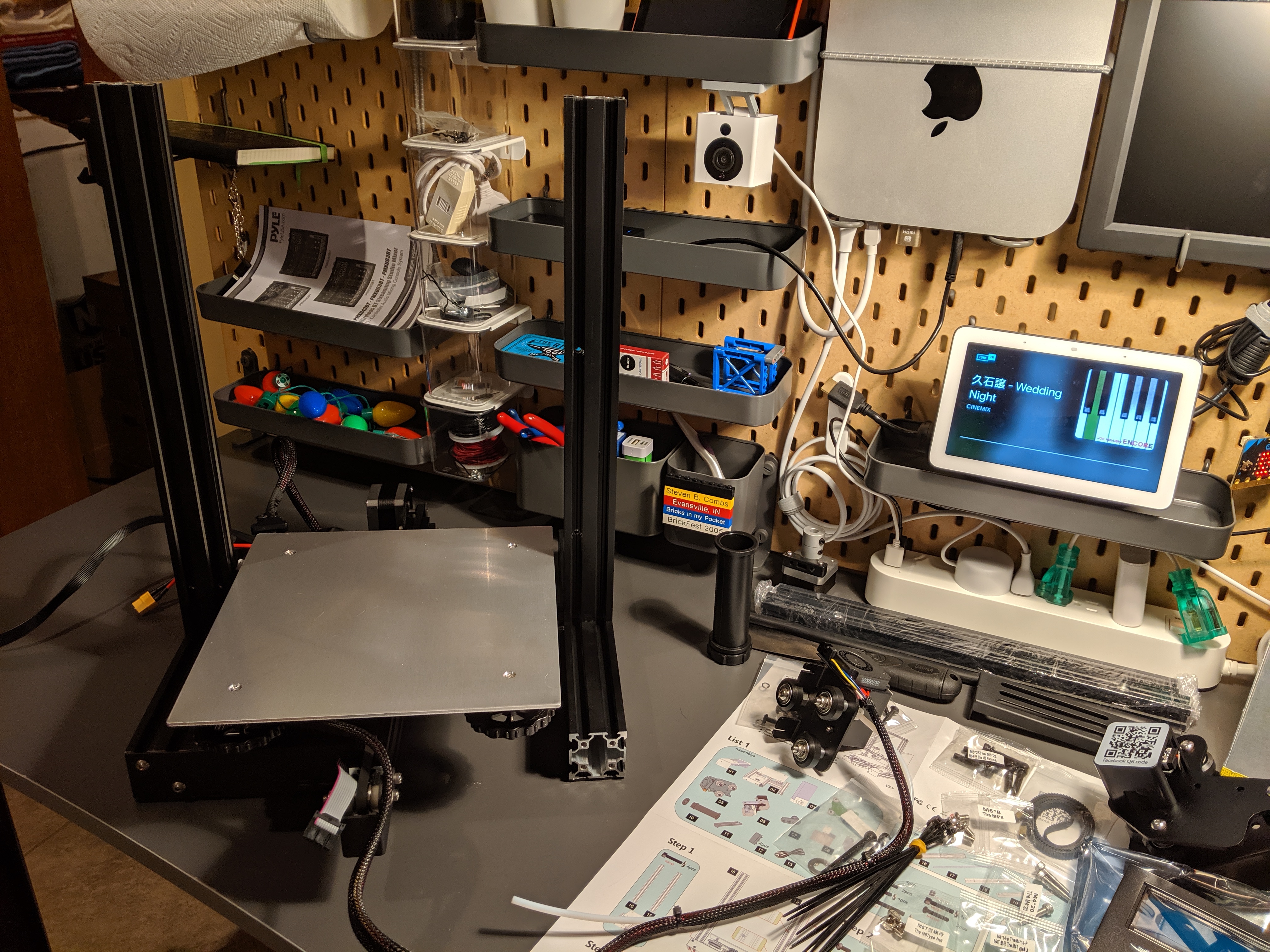 Another Allen wrench. I feel like I’m assembling what an IKEA version of a 3D Printer would be. And that’s not necessarily a bad thing. 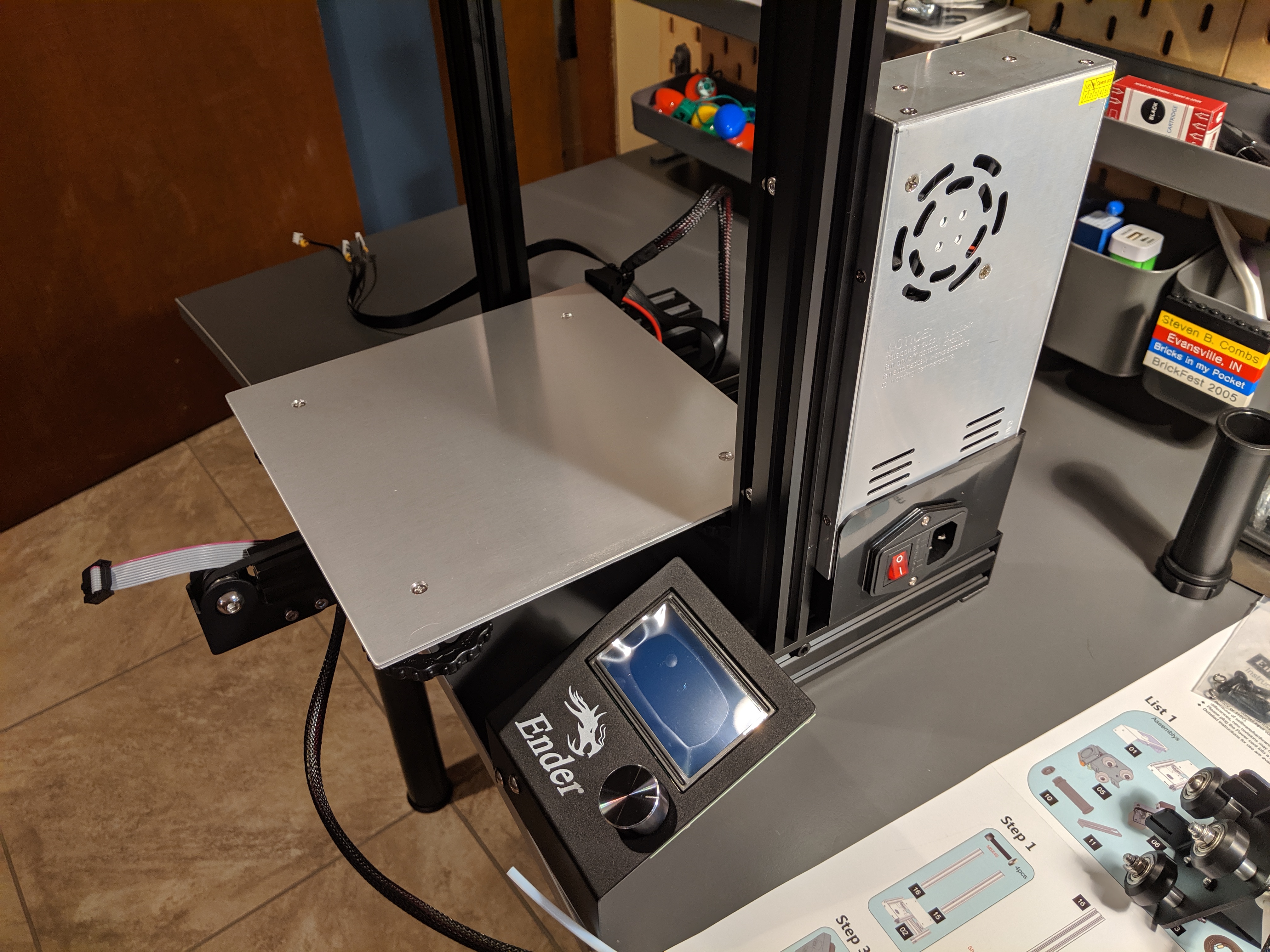 Remember to switch from 230v to 115v on the power supply if you live in North America. 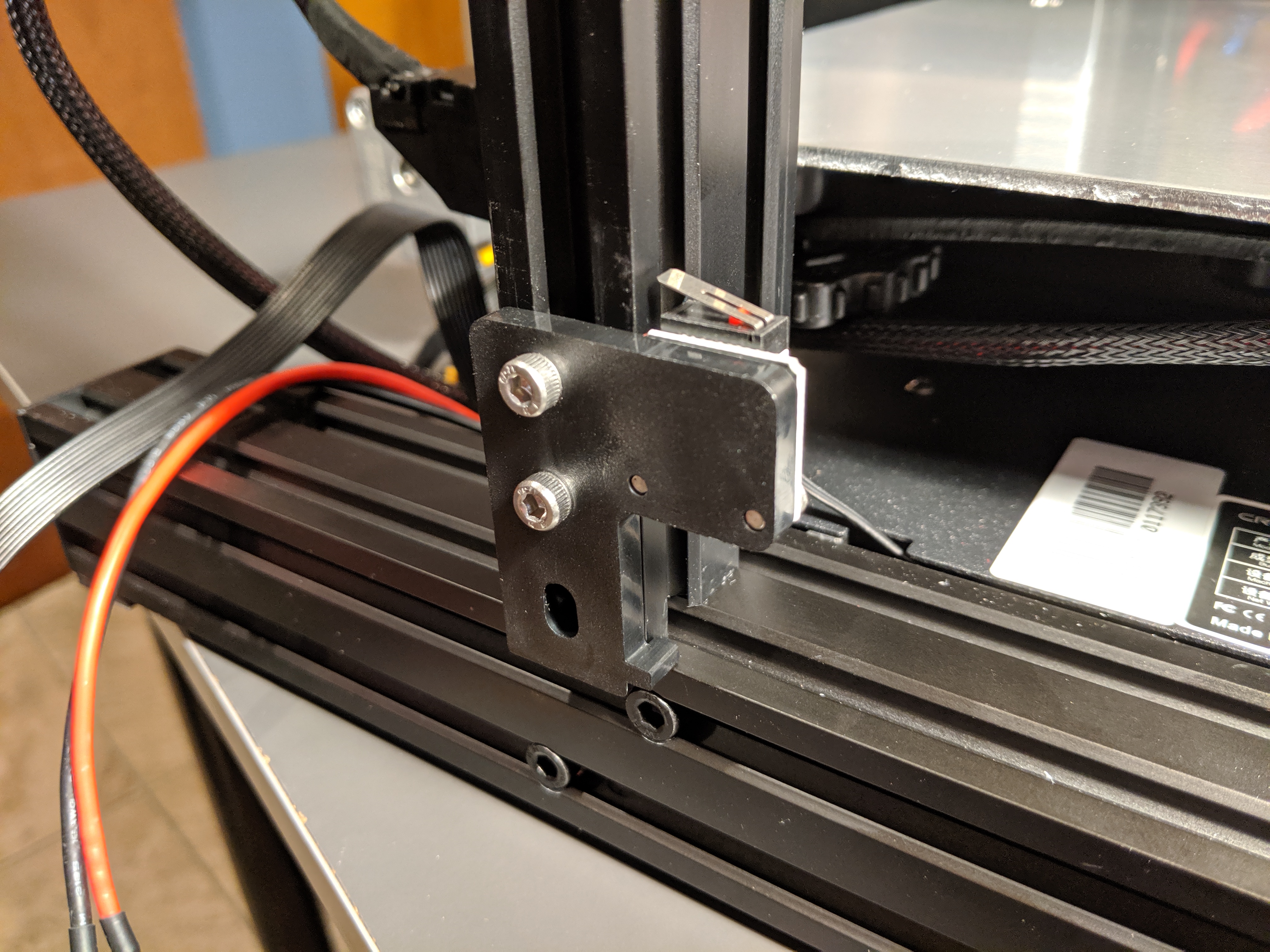 That was a bit tricky. I had to align the hammer nuts perfectly in the channel before tightening. Glad there was a stop on the limit switch holder to perfectly place it on the channel. {Update: The hammer nuts will seat themselves as you tighten. No need to worry with exact alignment. Just get them close.}

This seems to be straight forward. I had to move the bed to tighten the screws. I dropped the vertical screw bar as shown in the instructions. It did not instruct me to tighten the bar. Hopefully that will come in a later step. Most likely some parts alignment that needs to occur first. I’m also keeping the protective sleeve on the screw bar to protect it. {Update: Good move on my part. I hit this vertical bar a couple of time. Probably wouldn’t have hurt it, but who knows.}

This step is a bit scary. I’m not quite sure what I’m looking at but will give it a shot. That was a bit tricky due to a very tight space for the screws and the possibility that if not careful, I could damage the limit switch. Thanks to Creality for including holes in the roller plate so the Allen wrench could reach the screws. 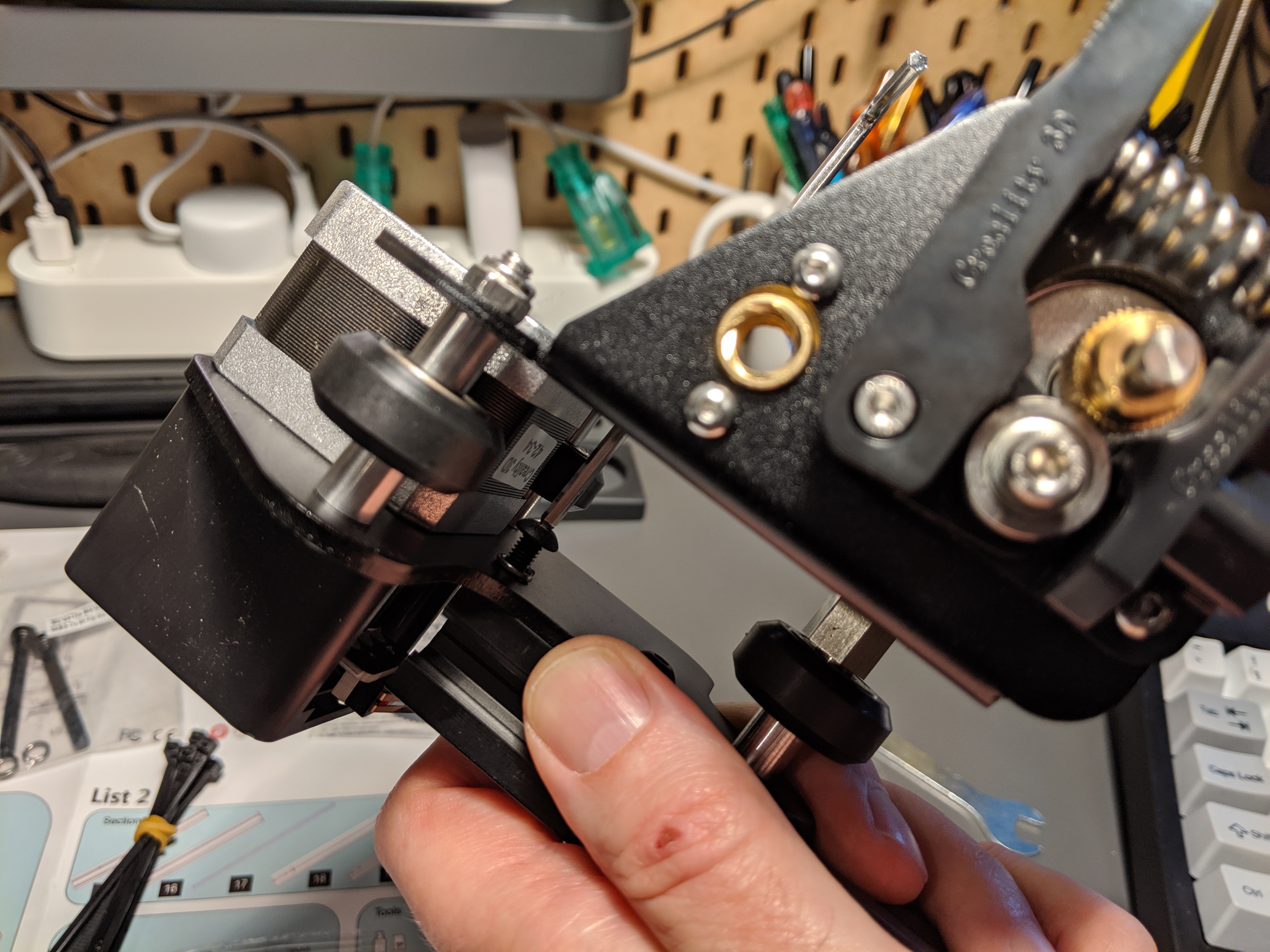 The belt was easy to install but hangs loose making it difficult to work with on the next few steps.

Oh boy, this looks complicated. Ugh, I have to try and get that print head on the rail with that umbilical cable out of the way. This is the trickiest step so far. It would have been helpful for the instructions to mention that you must install the print head before the tri-roller mount. Of course, it shows it that way, but I and I’m sure others may have assumed you could roll that on afterward - you cannot! Had to take the roller assembly off and put it back on. 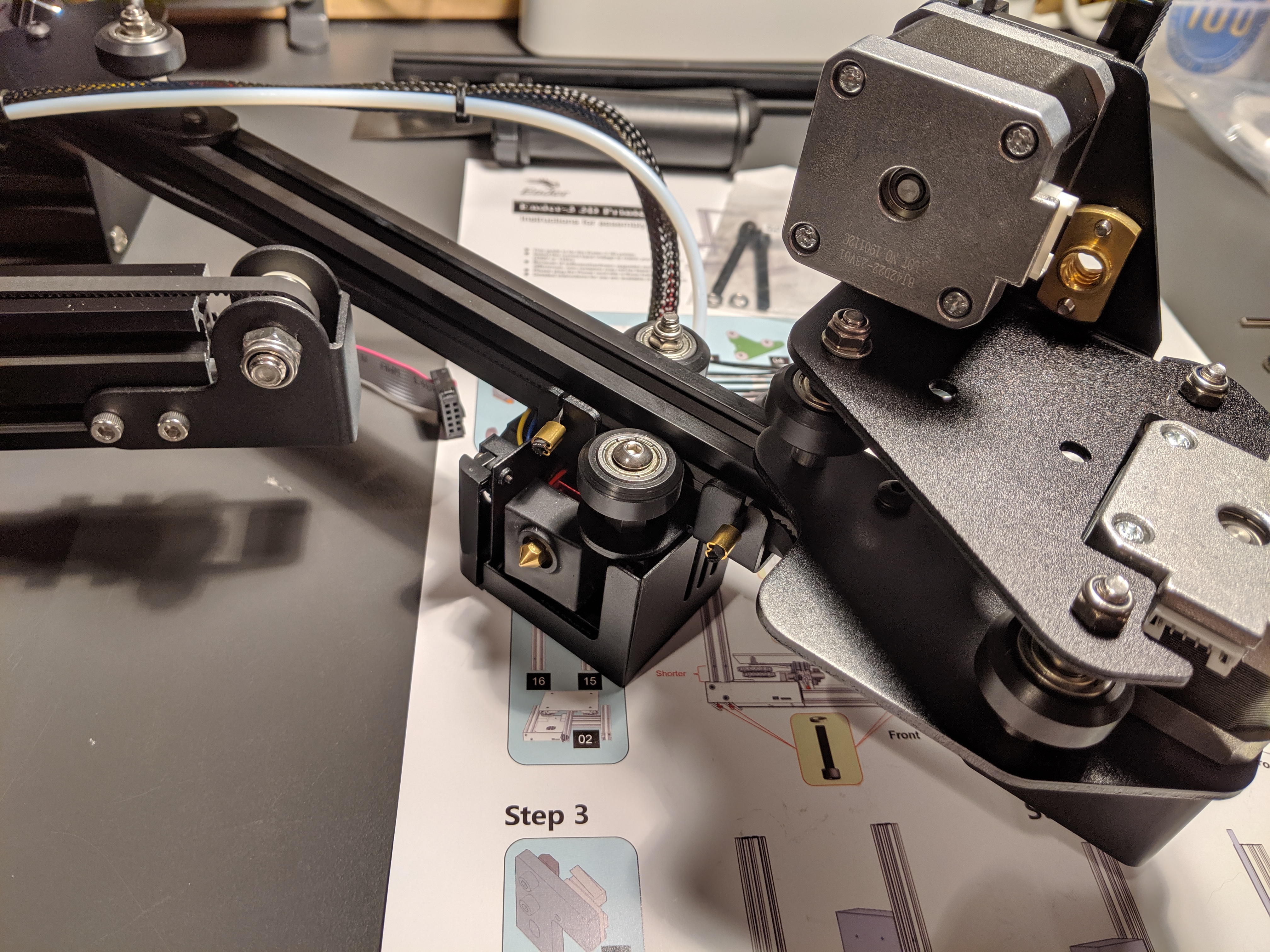 Connecting the belt to the print head on was also a bit tricky not knowing how it would be tightened later.

Another part with screws and hammer nuts included. It’s getting difficult to install the print rail due to the umbilical cord and confinement from the bar. It seems like I have it together properly though. Rail moves smoothly.

Phone call! Be back soon.

Finally! I don’t have to balance the horizontal print head bar anymore. Time to install it on the vertical supports.

Removed the vertical screw cover. Remember the screw on the connector at the bottom of the vertical bar? It didn’t say to tighten it in this step either, I tightened it anyway. There were two screws the instructions say to “Don’t tighten too tight.” What they mean is leave them loose. If you tighten them at all, the vertical screw will not turn smoothly and the bar will not move up and down easily. Could strain your stepper motor if you make this mistake. 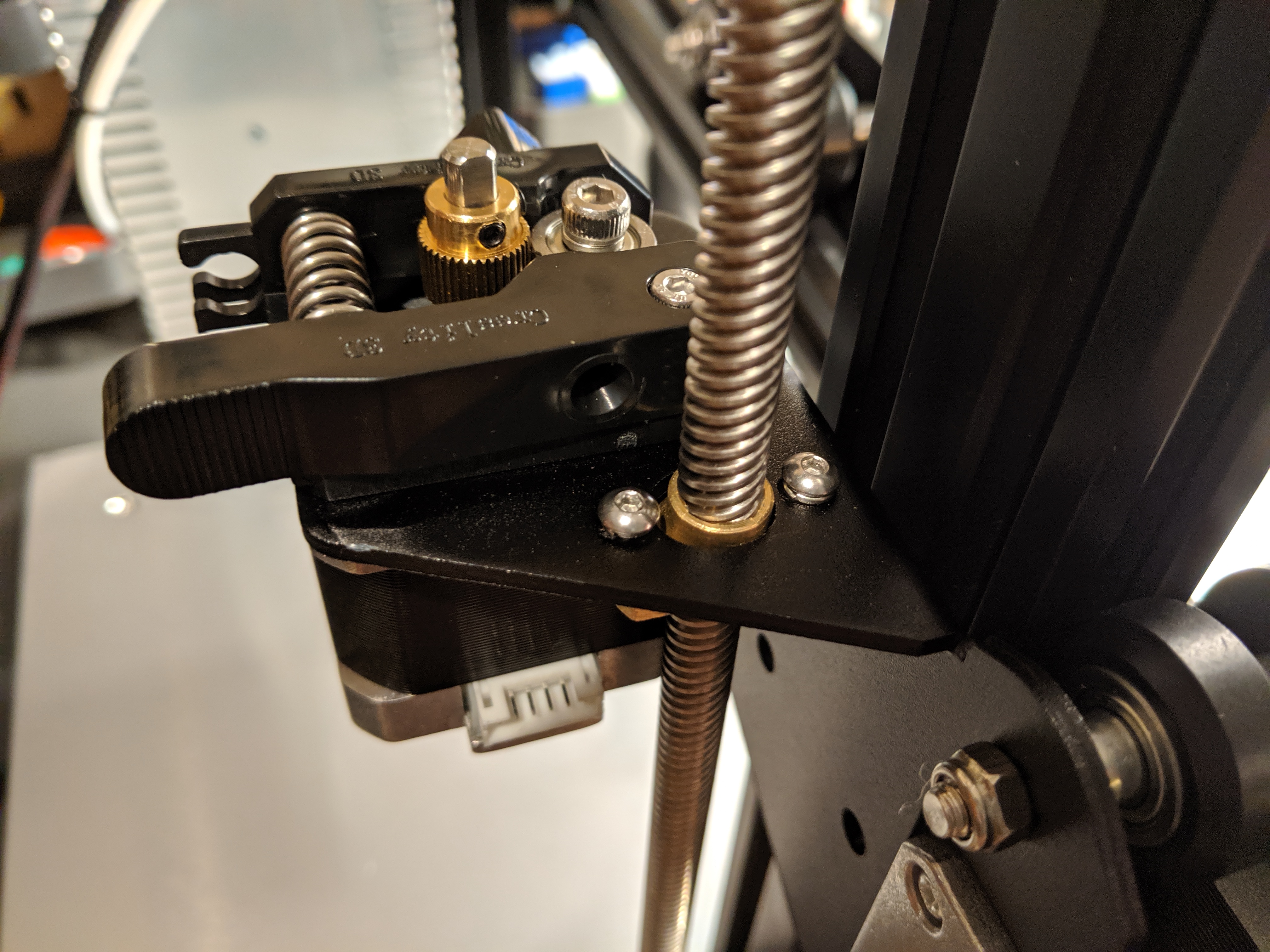 As far as assembly goes, this was likely the easiest step so far. Okay, maybe Step 2 was easier. It was a tight, but necessary, fit to ensure everything was held together tightly. Hey! It’s finally starting to look like a 3D printer. 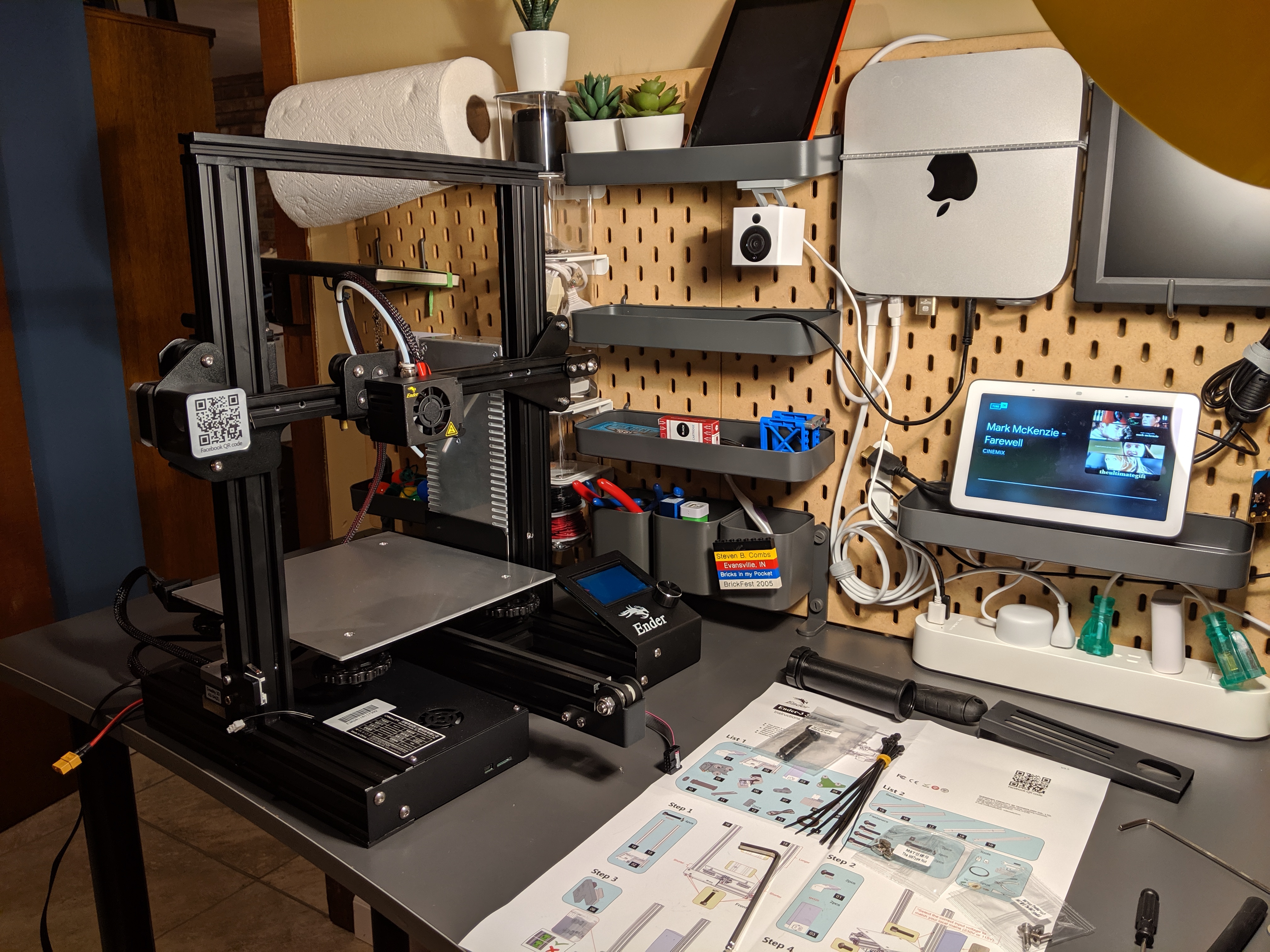 That went smoothly. I just had to anticipate the best location for the spool so the material will feed smoothly into the feed mechanism. No direction given for that distance across the top support rail. 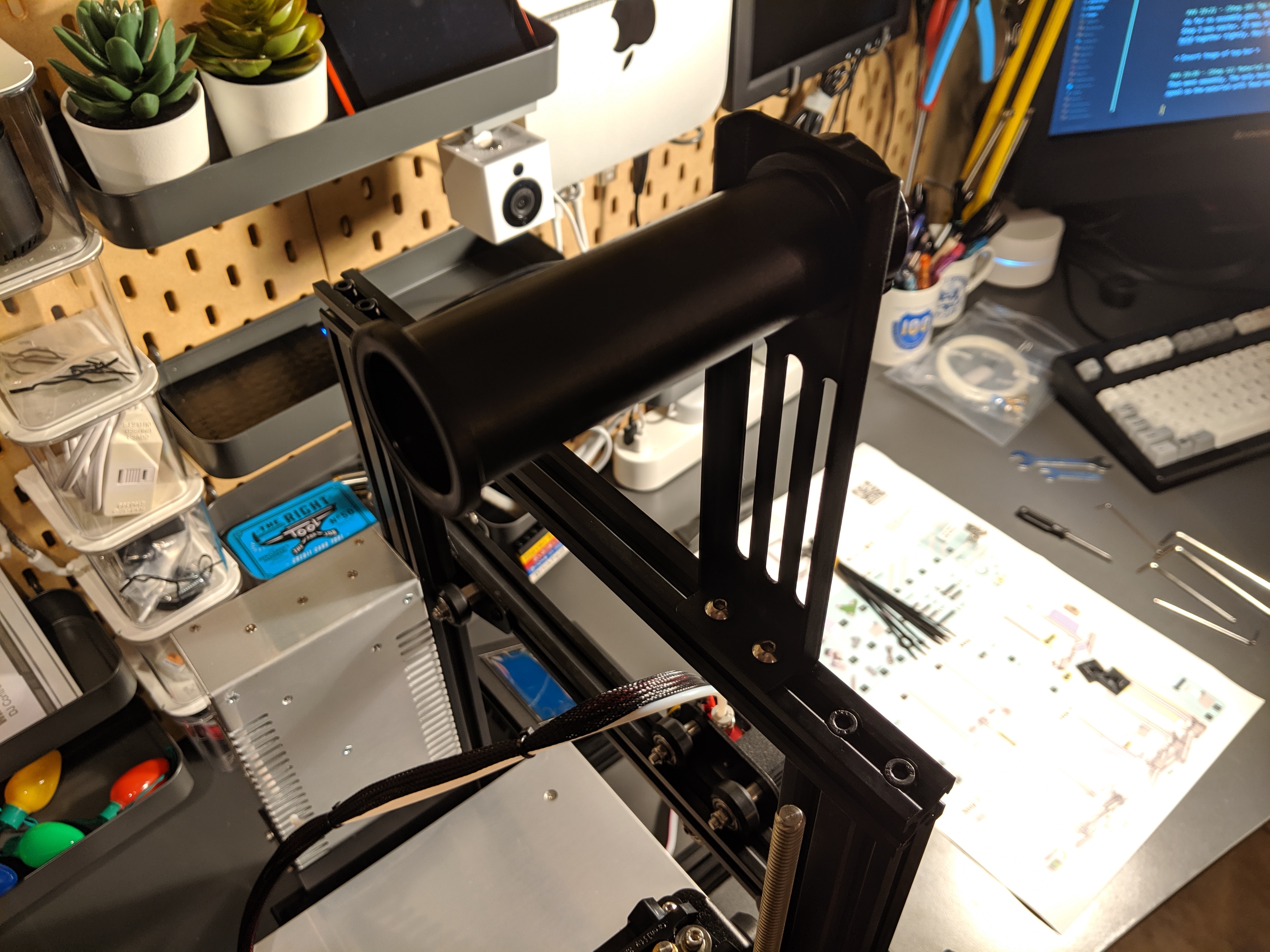 I’m getting close to the end now. Just have to take my time and ensure every electrical connector is where it belongs.

Oops. Just noticed I didn’t put on the end caps from step 10. Doing that now.

Love, love, love the little yellow plastic identifiers on the cables. Not just electrical, but the feed tube as well. Feed tube installation is not well explained. Here are the steps I used: 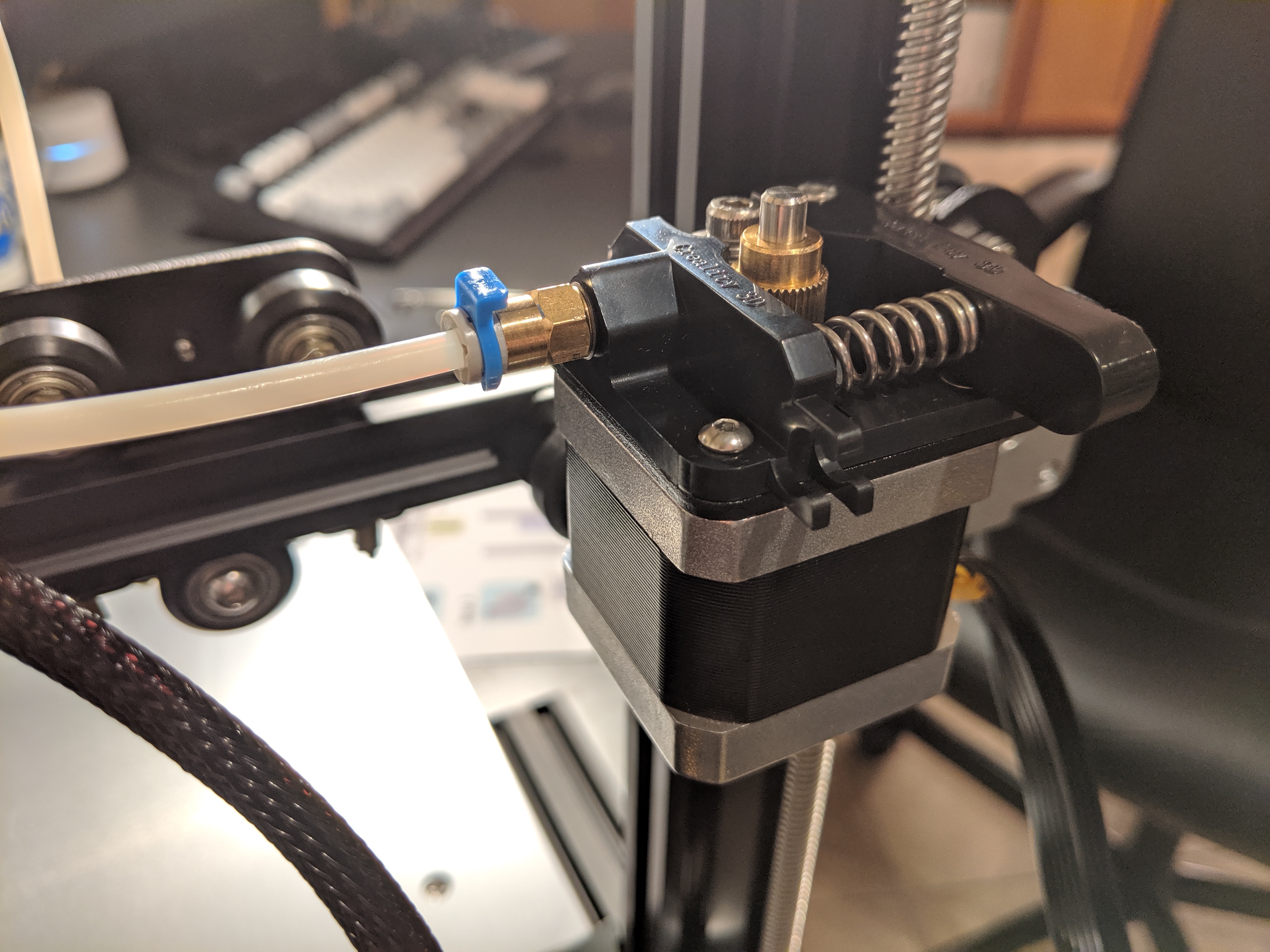 Looks like the last thing to do is connect the controller. Hmmm. It does not say to connect the power cord but I’m going for it. Before turning it on, I’m going to clean up my desk.

Just noticed as I was cleaning up that there are cable ties. I’m going to hold off on those for now. Want to see how it operations before I lock down cable routing. I also understand that there are some 3D prints available that help with cable management (another post).

I also placed the bed cover back on the heat bed using the provided binder clips; seems so low tech.

Current time 20:02. Not bad. That’s a pretty quick build time even when you consider that I was capturing notes on my computer and images with my Pixel 3 (#ad) during the process.

Okay, this is disturbing. I have a bag of M4x14P with M4T nuts. I’ve looked and I don’t see them in the printed instructions included in the box or the PDF file. I also don’t see any holes not filled. I’ll assume they aren’t needed and are used for optional parts. Lots of other spare screws and nuts, but they are all duplicates of other’s used. I am not worried about those.

It’s plugged in. Do I dare throw the switch? Here I go. 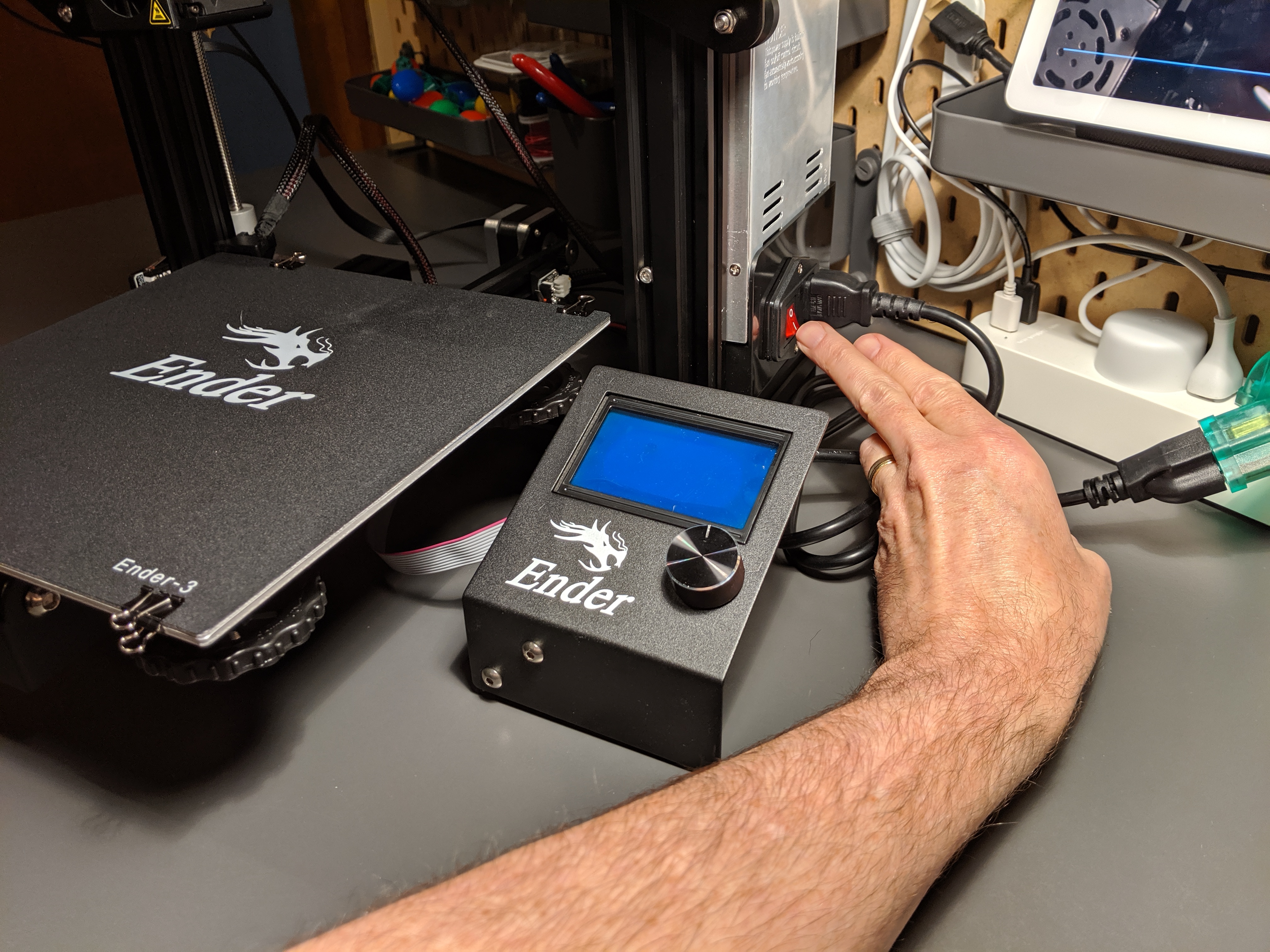 Fans are on, smell of ozone, and controller display is bright. Success so far. Now to test the motors. I’ll try the Auto home option. 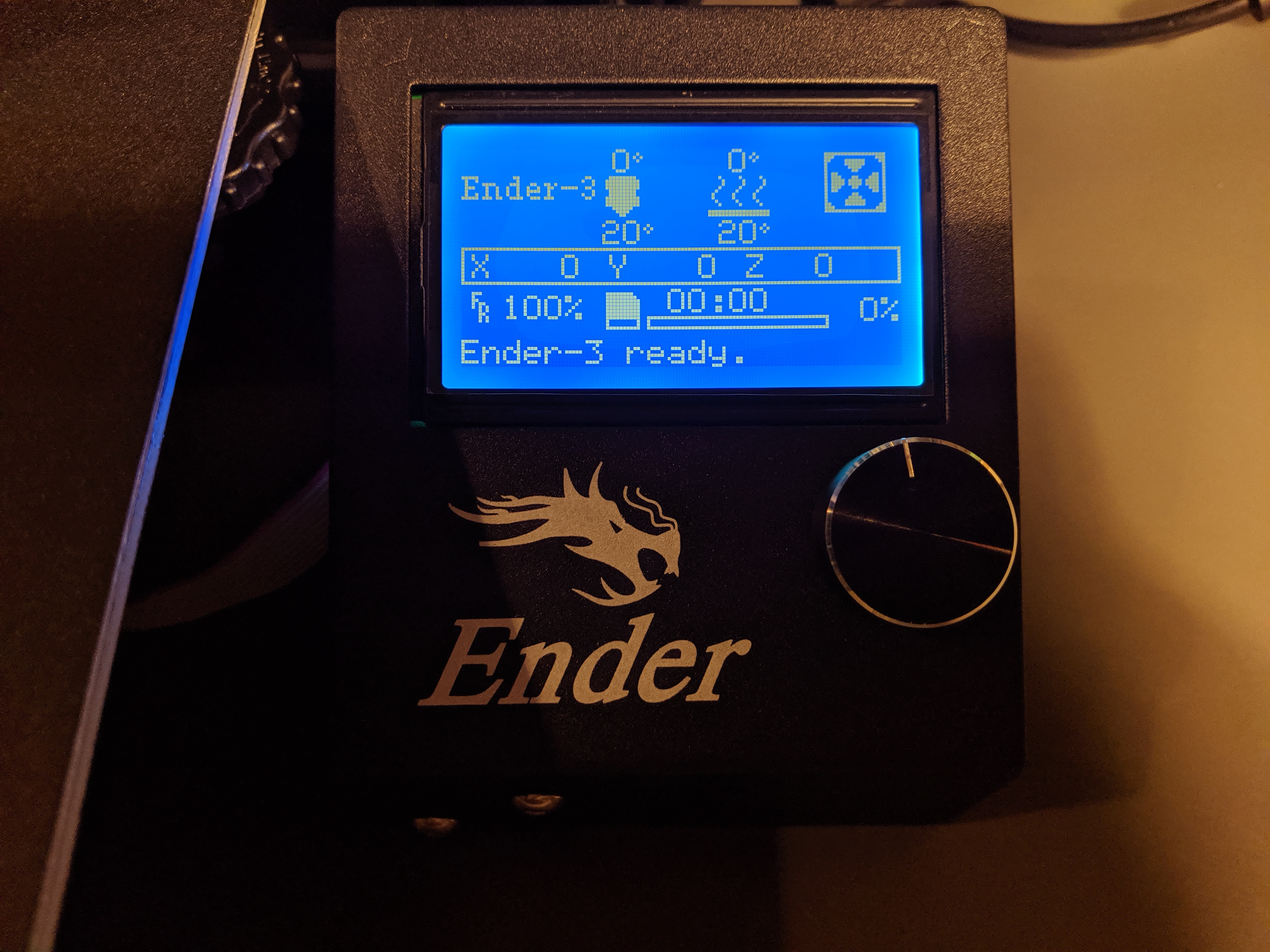 And it works! Assembly complete.

I have no idea. I’ve never 3D printed anything before and I know there is a learning curve. I’ll soon find out how steep that curve is. While learning, I will continue to document the process and post here. As a matter of fact, my next post, preparing the 3D printer to print, is now live.

I hope you enjoyed this post on the assembly of my new Creality Ender-3. Leave a comment below if you have any tips for me.