{This is an update to an original post I wrote around 8 years ago} About a week before Christmas of 2007, my son came home with homework for his Dad. My initial thought at the time, “Parents get homework?!?” Then I read the assignment; write about my favorite childhood Christmas gift. Immediately my mind conjured memories of several favorites: G.I. Joe with Jeep, Six Million Dollar Man action figure, Evel Knievel action figure with motorcycle, MEGO DC Superheroes and of course, LEGO. However, none of these past Christmas gifts compare to my all time favorite, the Ready Ranger Mobile Field Headquarters (RRMFH) from Aurora {a later version was renamed the Ready Ranger Mobile Field Pack}. 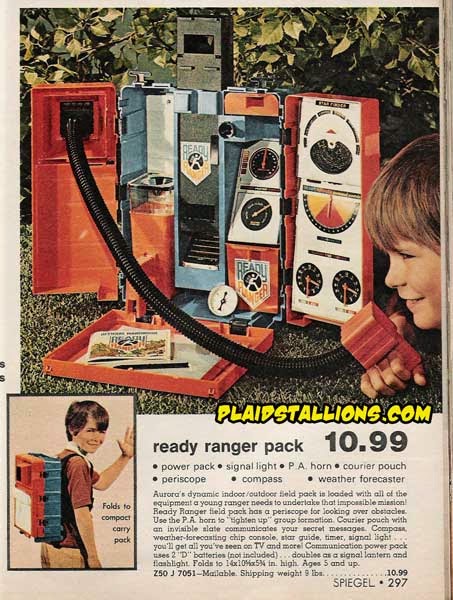 While preparing my RRMFH essay for my son’s teacher, I performed a quick online search for information about the backpack to spark my memories. I discovered a Spiegel catalog page (remember them?), courtesy of plaidstallions.com (see image above). Images of the toy brought back many Christmas memories from the mid-70s. In particular, the Christmas I received the RRMFH.

I remember requesting this toy from my parents. I actually did not believe I would receive it; however, in early December, I found the unopened box in the trunk of my parents car. I wish I could say it was by accident; however, I was a bit of a stinker in my day and I was actually searching for Christmas gifts. Unbeknownst to my parents, even to this day (but not after posting this), they never knew I found (and I use the term loosely) my dad’s keys to the car and went out to the trunk for a peek. I did not expect to find anything. When I did, “Oh boy!” It would be a long several weeks until Christmas morning.

Let’s get back to the assignment. After reminiscing, I made a print of the image and submitted it along with the written exercise to my son’s teacher. I’m definitely an overachiever and Dad would surely receive an “A” for his submission since you can’t “shoot your eye out” with this Christmas gift (a reference to the film A Christmas Story). This $11 toy was the perfect gift for a young budding gadget geek and military brat like me!

For those who did not have the pleasure of experiencing the RRMFH, it was an amazing use of mid-1970s plastic and was my Red Ryder BB Gun (yep, another reference to the film A Christmas Story). This toy, composed of an amalgam of cardboard, paper, and transistor electronics sent me on numerous adventures during my 1970s childhood. Most of these adventures occurred in my room or at home but one, which I will share later, will forever hold a special memory.

The Aurora built backpack had features that would make 007 proud. All these features were housed in a single backpack and revealed only when the backpack’s three covers were open; as shown in the image below. 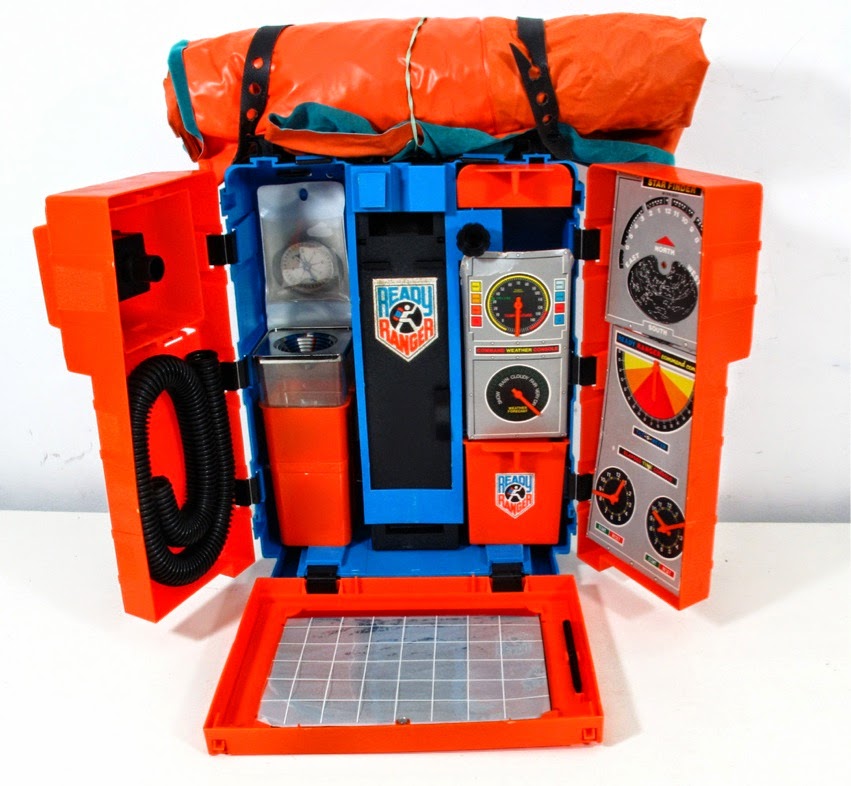 Below are a few of my personal favorite features:

Speaking of comics, below is an advertisement for the Ready Ranger Mobile Field Headquarters from a 70s era comic book. It is the ad that made me head over heals for this toy. 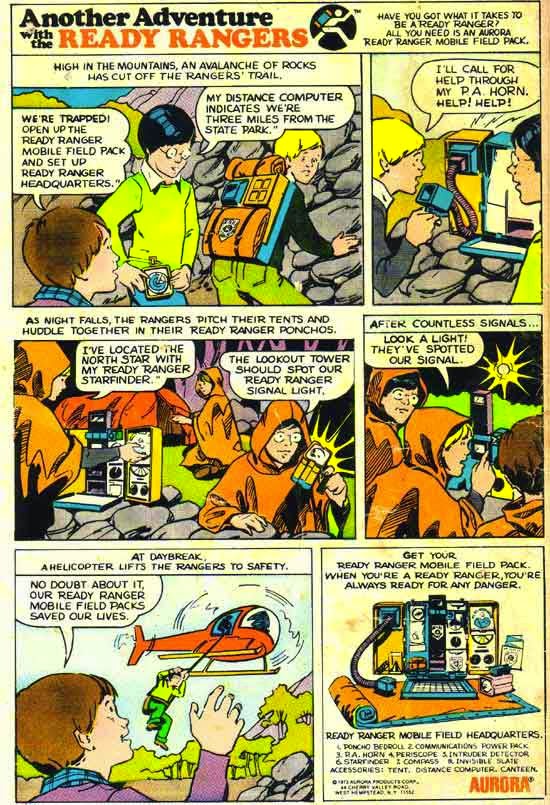 The helicopter was not included and sadly, neither was a walkie-talkie. This is the only feature I can think of that would make this toy more complete for the young adventurer at the height of the Citizen’s Band (CB) radio craze of the ’70s. I owned a set of walkie-talkies and am betting any other child interested in this toy would have owned a Ready Ranger branded set. Probably not a significant omission; however, this would have been a very intriguing accessory. The title would even be fun to say, “Ready Ranger Walkie Talkie.”

Included in the set was a registration card (you can view this card by using the Google+ Photos Album link at the bottom of this post) that also included the “Ready Ranger Pledge” which I share below (raise your right hand and repeat after me):

I, (state your name), as an official Ready Ranger, promise:

I would suggest those words still apply today. Who said 1970s toys were not educational?

I alluded to an early adventure. Let me share it now. I remember a crisp early spring day when I made a trek through a forest. Strapping the RRMFH on my back and filling an old military canteen I had inherited from my father, I headed over a wooded mountain (actually a hill, but hey…I was ten) to visit a friend in a neighboring subdivision. It was a bit rainy that day to add challenge and also provide an excuse to use the poncho. Along the way, I made sure to stop, set up my base of operations and defend it against evil.

Defending meant setting up the alarm to protect the perimeter of my temporary headquarters and setting up the back pack just perfectly so I could look over a small berm through the periscope while in a prone position. I then spent time fortifying my position, that is, placing dead tree limbs around my RRMFH. Lastly, I took off my poncho and created a temporary shelter that would cover me and the RRMFH. I vaguely remember my legs sticking out as the poncho wasn’t big enough to be a full tent. Lastly, I sketched a rough map of my position on the vinyl map knowing that should my position be overtaken, I could quickly lift the map flap and it would magically erase. “I was ready like a ranger!”

My imagination conjuring images of bad guys looking for me. But they would not locate me that day in my concealed position. After ensuring the safety of my position and the mountain (err, hill), I packed up and then continued the trek to my friends house.

That solo trek is an adventure I will never forget. It was one of the first times I ventured out on my own and for some magical reason, probably the RRMFH or naivety, I felt like I was safe and ready for any danger to come my way. And yes, I made it to my friend’s house; however, my older brother came to pick me up later that day as I was too tired to walk back home.

Sadly, this toy died in the late 1970s and to my recollection there has never been another like it on toy store shelves. Equally as sad; I have no idea what happened to my original Ready Ranger Mobile Field Headquarters. I know for years the original box became a container to store my comic book collection; however, I have no recollection of what happened to the actual toy.

During the preparation of this post, I began to collect images of my favorite childhood toy. Below is the link to my Google+ Photo Album if you would like to see additional images of the Ready Ranger Mobile Field Headquarters and accessories that were later released (of which I did not own).

If you have images to share (I would love to have one with an owner using and/or wearing the RRMFH from the 1970s), please send them to me and I will add to the album. This toy and the memories it created must be preserved.

NOTE: Google+ is no more. I’ll try and find some time soon to move the images to a Google Photos album.

Anyone else remember the Ready Ranger (evidently they do as a Ready Ranger Facebook Fan page is now available)? I would love to read your fond memories. You can leave them in the comments section below. By the way, I never did receive a grade from my son’s teacher. Let’s just say I received an “A” and leave it at that.