This TI is a first for me and because of this, hang on. It’s going to be a long and informative post. My follower’s are aware I am a Commodore computer fan since my first computer, the Commodore VIC-20, and I’m closely following MEGA65 development; however, there was a strange disturbance in the force on 2021-09-11.

MEMBERSHIP: I now offer retroCombs memberships from $1 (PET level membership) to $20 (MEGA65 level membership) that include levels in between for all budgets (VIC-20, C64, Plus/4, and C128). If you’d like to support my content and get access to my Discord server along with other cool freebies, check out each level at https://www.buymeacoffee.com/retroCombs.

The cause of this disturbance was the purchase of a non-Commodore retro computer, the Texas Instruments (TI) 99/4a. In this blog post and companion video, I will unbox it and look at this computer from my almost 40 years of experience with Commodore lens.

In the video below, I unbox a lightly used TI 99/4A purchased at the Vintage Computer Festival Midwest 2021.

Links in this Episode:

My neighbor and buddy over at Jamie’s Hack Shack and @slofunk on Twitter sent me a DM to ask if I wanted to make a day trip to Vintage Computer Festival Midwest (VCFMW) 2021 in Elmhurst, IL; outside Chicago. Despite my love of retro computers, I’ve never made the trek to any conference, festival, or users’ group. The offer intrigued me and I needed a distraction from two recent deaths in the family. I accepted the invite and on 2021-09-11, Jamie arrived at my home in his Honda Civic Type R, which is a sweet ride, and we headed north.

We arrived at VCFMW about four hours later and began to make our way through the halls and hallways of the show. 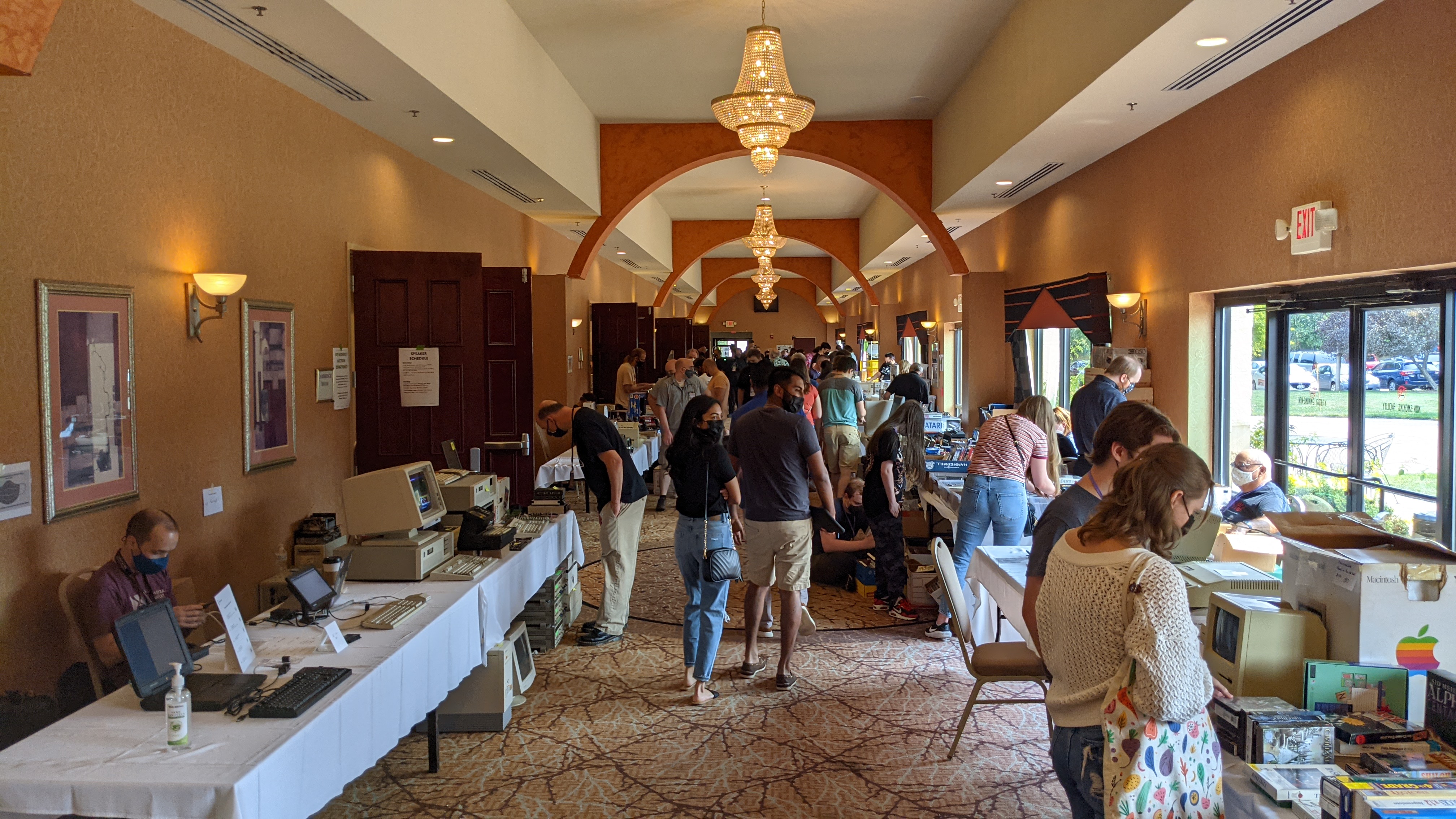 There were displays of many kinds and vendors selling both old and modern retro computers and accessories. There was even a free table; although everything on that table was more modern. Two large hallways housed the vendors and two large conference rooms that displays that ranged from PETs, to Apple, to Altair, to telephony. It was amazing to see these old, and cherished, projects and modern recreation alike.

Among the displays were a smattering of sellers. I stopped by and had a visit with Kevin Ottum of Nu-Brick 64 Power Supplies. He had power supplies in stock at VCFMW and I grabbed the one along with a Plus/4 adapter. I’ve been leery to keep using the default power supply for my Plus/4 and was glad to purchase one on site and at a reasonable cost. Now I can safely finish my Plus/4 Users Manual Series.

After Jamie and I had exhausted our time on the show floor, we headed back into the hallway to take a look at the many vendors. We spent an inordinate amount of time at the Bonus Life Computers table. What a collection! I suspected I would not walk away from this table without a purchase and I could tell by the look in Jamie’s eyes; he would not leave the show empty handed either.

Jamie added an ALDI Commodore 64 to his growing collection of Commodore computers. There were several, and I considered a purchase; however, my eyes went a different direction when I saw a beige Texas Instruments TI 99/4a in what looked like mint condition with a box and complete documentation set. The owner opened the box and said, “Want to give it a try?” I gave him the affirmative, and he carefully removed it from the box. As suspected, this computer was lightly used. “How much?” I asked. “$70,” he replied. That was within my VCFMW budget and would keep me out of trouble with the missus.

He used a video DIN adapter and plugged it into monitor with RCA plugs. After a few tries, the TI blue screen and color bars appeared. 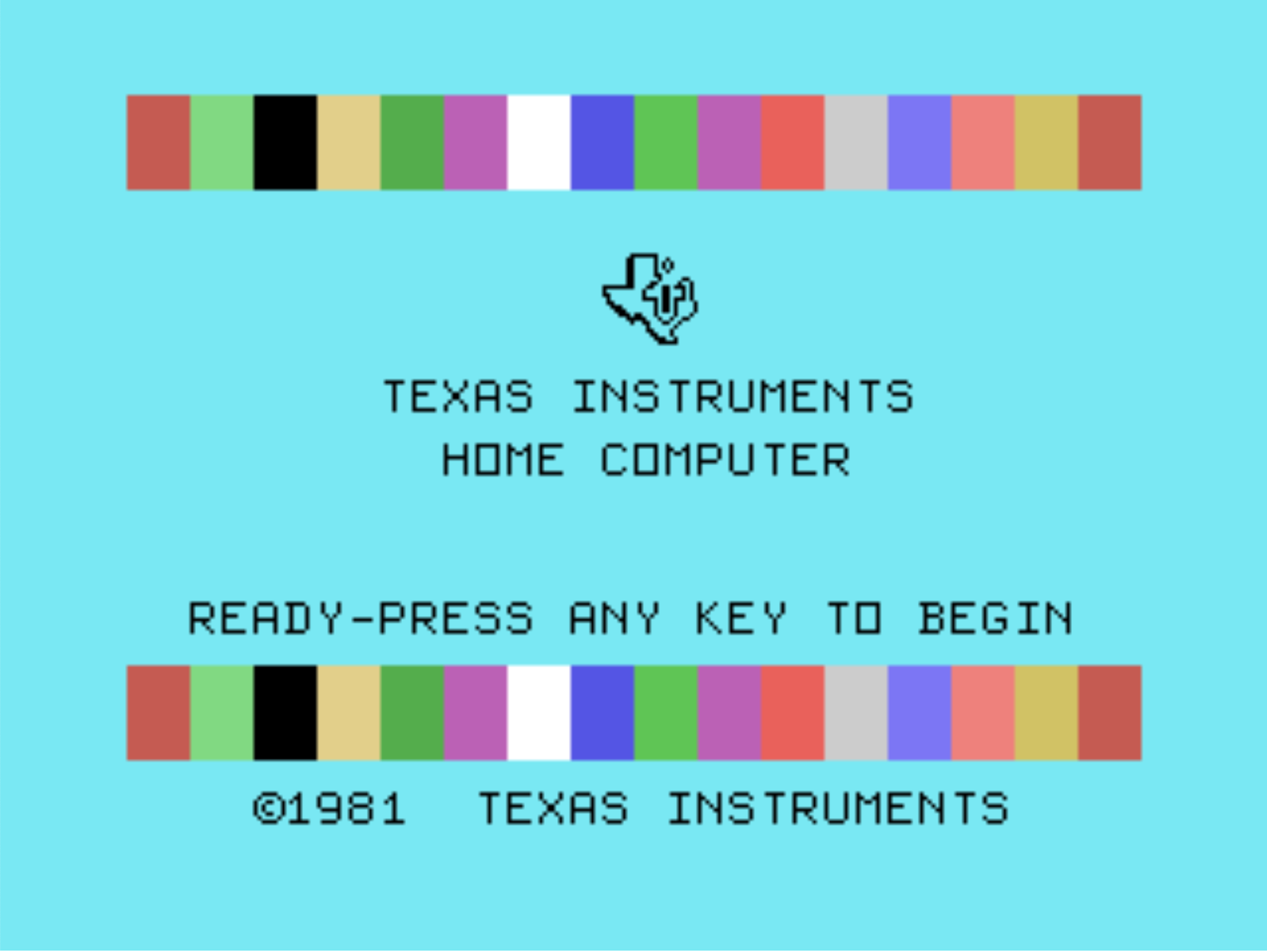 He shuffled things around and said, “give it a try.” I typed on the keyboard for a few minutes, noting the strange keyboard layout, great keyboard feel, and unfamiliar color of the screen. I typed in a BASIC program, noting how dissimilar the experience was from my Commodore computers. “What do you think?” he asked. “It is just quirky enough that I want it.”

“I have cartridges for $5,” he said as he handed me a tub full. Excellent! The search was on and Jamie came over to help me select three of them:

The vendor rang up the total, added the 8% Chicago tax (OUCH!), and packed it all up for me. In the meantime, I noticed Jamie selecting an ALDI Commodore 64. We would both walk about with a computer on this day!

Below is an image of my entire haul, including my free VCFMW badge and lanyard: 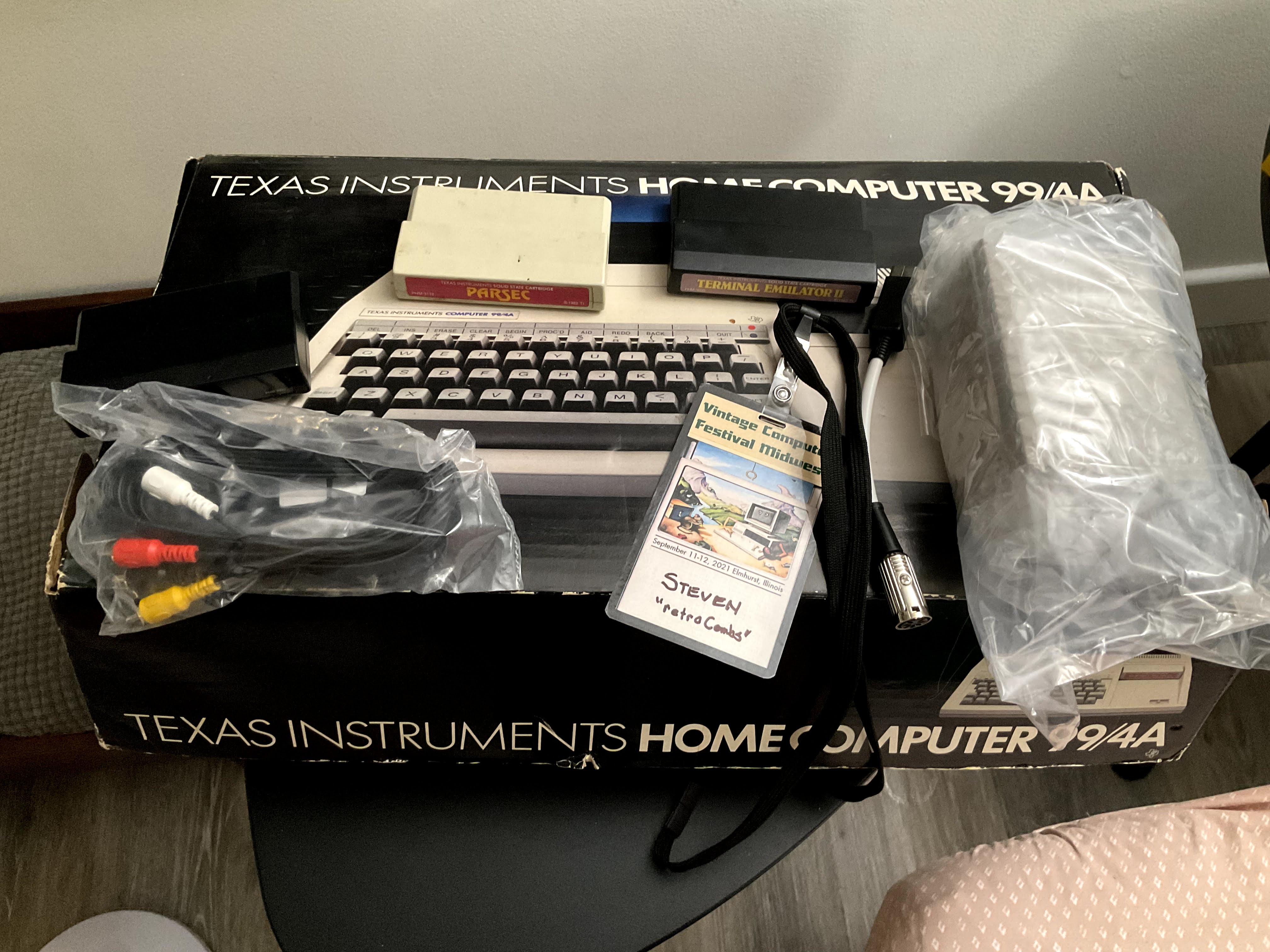 Before I unbox the TI 99/4a, I need perspective. Let’s take a look at the history of this computer.

Short History (of the TI computer, not me)

Even though I had a Commodore VIC-20 at the time, I knew about the TI 99/4a from the many computer magazines I would read. I always saw it as a step up from the Commodore due to its 40 column screen, business quality keyboard, and ability to hang additional options off the side. And that black and steel industrial design was kickin’ in the 1980s! I researched the history of this device and found an interesting connection to Commodore computers. Here’s my synopsis as paraphrased from Wikipedia and Old Computers.

Released in 1979, the TI 99/4 includes a TMS9900 microprocessor. What sets this process apart is that while a majority of home computers were 8-bit, this processor was 16-bit, with caveats that I’ll not cover but recommend you click on over to Noel’s Retro Lab for his TI 99/4A playlist.

There were shortcomings to the original model, such as keyboard, ROM-only software options, tight-fisted developer control, and cost. TI addressed these in a 1981 model; the TI 99/4A. TI cut the cost in half and the “Peripheral Expansion System” or PES provided expansion capabilities. TI added another novelty, their famous TI Speech Synthesizer. While they released developer tools, TI continued its tight fisted control of software distribution; limiting the availability of software.

TI released a cost reduced beige version (the one I purchased) in June 1983 with a renaming the 4A PCB as a “QI” (Quality Improved) board. Per MainByte, the QI included additional circuitry that extended their heavy hand on developers:

One change that was made that created major grumbling was TI’s decision to change the internal workings to lockout unlicensed ROM cartridges. They did this to keep other 3rd party companies from producing cartridges for the TI-99/4A. Not all QI consoles had this “feature”, and even non QI, later beige consoles may have. It is easy to determine if you have the lockout or not. Look at the first screen (the one with the color bars) when you turn on the console, if you show a copyright date of 1981 you do not have the lockout, but if it shows a copyright date of 1983 then you do.

We’ll fire up my TI 99/4a and see if I have the lockout version.

Here are the complete specs for the TI 99/4a lifted from the Wikipedia page:

Unboxing the computer was a pleasurable experience. I took the contents out of the box prior to my purchase; we placed them back in the order we believe they were originally and I was careful not to look at each individual item again until I could go through the process on camera. I document the unboxing in the companion video. Watch that video if you want more narrative or my thoughts on the presentation of the computer.

Here’s the extensive documentation included with my computer:

Besides this documentation, there was the following hardware:

All-in-all, this was a complete and amazingly clean package. The computer feels, looks, and operates like a brand new unit. I am pleased with my purchase.

Earlier, I discussed TI’s QI version of the computer. To remind us, this isn’t QI charging!!! This is Quality Improved for cost reduction. If a TI has QI, modern devices like the Brewing Academy’s finalgrom99, will not work. This is not a non-starter, but a TI with QI will limit the use of this device. Let’s find out which version I have. Remember, we are looking for the 1991 startup screen and not 1993. Here we go. Flip the switch and…

It was a 1981 startup screen. Yes! I can use all devices and cartridges available for the TI 99/4A.

Here’s the sad part. You know the money I spent on the computer; $90 bucks? I spent triple that amount on these accessories. Uh, oh! Please don’t tell my wife!

I’m not going to look at these items as part of this blog post and companion video; however, expect an update on either Twitter, this blog, or on the channel.

I’m happy with my purchase. The computer, box, and contents are pristine. The opportunity to learn about an 1980s computer I didn’t own will be informative and fun. I was glad to see an active community using the computer and modern devices available to upgrade the system. I will look on eBay for other devices at reasonable rates, such as the speech synthesizer and the PES. All-in-all, a chance to compare this to my favorite line of computers, Commodore, will be an interesting exercise. I do not believe this device will make me a TI convert, though. There’s not much there to build on after the initial experience.

All right, TI fans out there. What did I miss during my first look? Drop me a comment below and let me know. The fun is in the learning from seasoned users. Can’t wait to hear what you have to share.

Don’t miss the TI fun, SUBSCRIBE to my YouTube channel and check out my other retro computing related posts.

Help make this content better! Leave your comments, corrections, additions, and thoughts in the comments below. You can also email me at retrocombs@icloud.com. Thanks for reading and if you are inclined, please let others know about the blog using the hashtag #retroCombs.