Last week Julie McClure with our local newspaper, The Republic, stopped by my office for an interview. The original intent of the article was to focus on this blog and the gadgets I review. She became aware of my blog after I was quoted in an article by the Associated Press. As we began to chat, the discussion soon moved to other topics and at the end of the hour, we had covered several subjects not on our original agenda. I really enjoyed the interview, but wondered how Julie would craft all the pieces into an interesting article.

Today, I found the article on the front page. I was pleasantly surprised at the accuracy of the article and enjoyed the way Julie captured the tone of our discussion and my interests. I’ve received some wonderful comments from my family, friends and colleagues with the most common comment being, “can I have your autograph?” This, of course, is said in jest. An additional surprise was the inclusion of “spot-on” quotes by two colleagues.

If I were to nit-pick a single item, it would be the use of the word “legos.” My AFOL readers will immediately point this out. While I always refer to our favorite building blocks as LEGO, LEGO sets, or LEGO bricks, the use of the term “legos” is something we AFOLs (as well as the LEGO corporation) will have to just continue to work on.

Thanks to everyone for the verbal, email and social media comments. A special thanks to any reader who is just now finding this blog. Welcome and drop me a comment below to let me know you stopped by. Columbus is a small town and I am sure we will cross paths soon.

Huge shout out to Julie and Andrew at The Republic.

Below is the article in print layout followed by the full text. Be sure to visit the original link to view additional images. 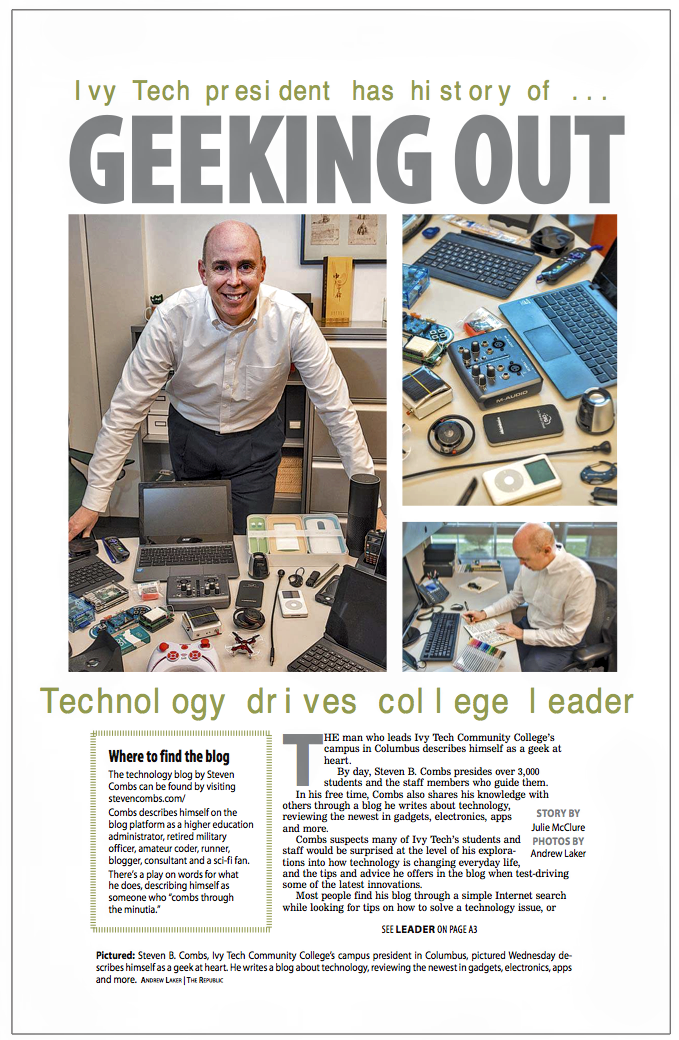 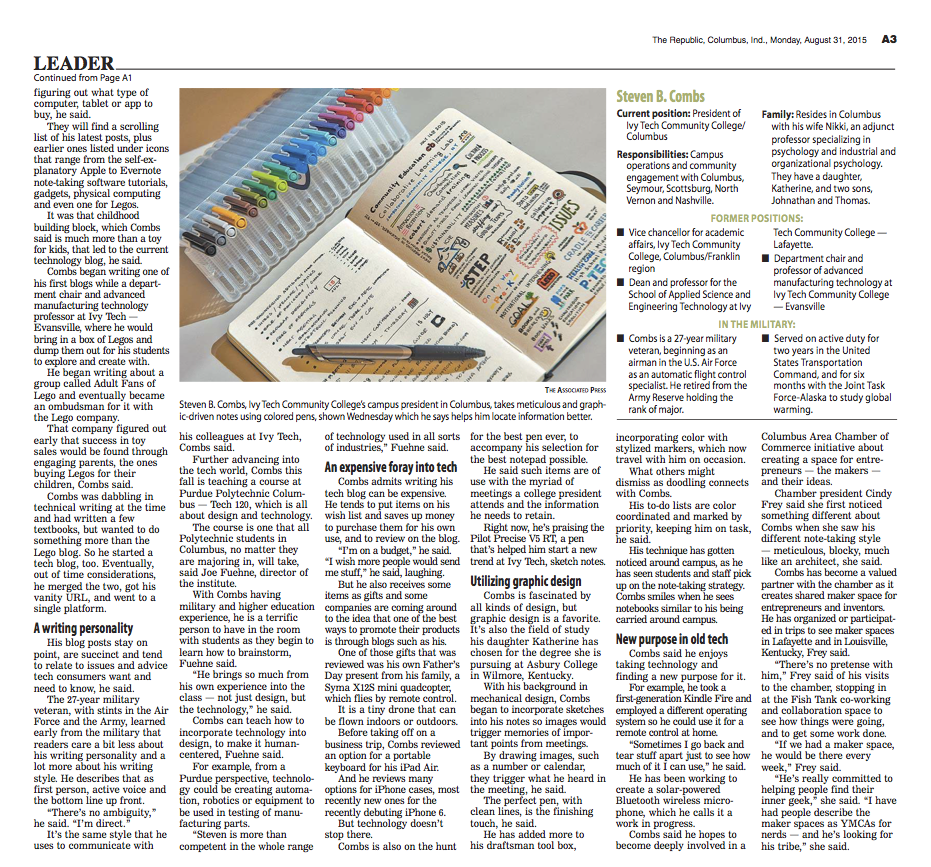 Full Text: Ivy Tech President has a History of “Geeking Out”

The man who leads Ivy Tech Community College’s campus in Columbus describes himself as a geek at heart.

By day, Steven B. Combs presides over 3,000 students and the staff members who guide them.

In his free time, Combs also shares his knowledge with others through a blog he writes about technology, reviewing the newest in gadgets, electronics, apps and more.

Combs suspects many of Ivy Tech’s students and staff would be surprised at the level of his explorations into how technology is changing everyday life, and the tips and advice he offers in the blog when test-driving some of the latest innovations.

Most people find his blog through a simple Internet search while looking for tips on how to solve a technology issue, or figuring out what type of computer, tablet or app to buy, he said.

They will find a scrolling list of his latest posts, plus earlier ones listed under icons that range from the self-explanatory Apple to Evernote note-taking software tutorials, gadgets, physical computing and even one for Legos.

It was that childhood building block, which Combs said is much more than a toy for kids, that led to the current technology blog, he said.

Combs began writing one of his first blogs while a department chair and advanced manufacturing technology professor at Ivy Tech — Evansville, where he would bring in a box of Legos and dump them out for his students to explore and create with.

He began writing about a group called Adult Fans of Lego and eventually became an ombudsman for it with the Lego company.

That company figured out early that success in toy sales would be found through engaging parents, the ones buying Legos for their children, Combs said.

Combs was dabbling in technical writing at the time and had written a few textbooks, but wanted to do something more than the Lego blog. So he started a tech blog, too. Eventually, out of time considerations, he merged the two, got his vanity URL, and went to a single platform.

His blog posts stay on point, are succinct and tend to relate to issues and advice tech consumers want and need to know, he said.

The 27-year military veteran, with stints in the Air Force and the Army, learned early from the military that readers care a bit less about his writing personality and a lot more about his writing style. He describes that as first person, active voice and the bottom line up front.

It’s the same style that he uses to communicate with his colleagues at Ivy Tech, Combs said.

Further advancing into the tech world, Combs this fall is teaching a course at Purdue Polytechnic Columbus — Tech 120, which is all about design and technology.

The course is one that all Polytechnic students in Columbus, no matter they are majoring in, will take, said Joe Fuehne, director of the institute.

With Combs having military and higher education experience, he is a terrific person to have in the room with students as they begin to learn how to brainstorm, Fuehne said.

“He brings so much from his own experience into the class — not just design, but the technology,” he said.

Combs can teach how to incorporate technology into design, to make it human-centered, Fuehne said.

For example, from a Purdue perspective, technology could be creating automation, robotics or equipment to be used in testing of manufacturing parts.

“Steven is more than competent in the whole range of technology used in all sorts of industries,” Fuehne said.

An expensive foray into tech

Combs admits writing his tech blog can be expensive. He tends to put items on his wish list and saves up money to purchase them for his own use, and to review on the blog.

“I’m on a budget,” he said. “I wish more people would send me stuff,” he said, laughing. 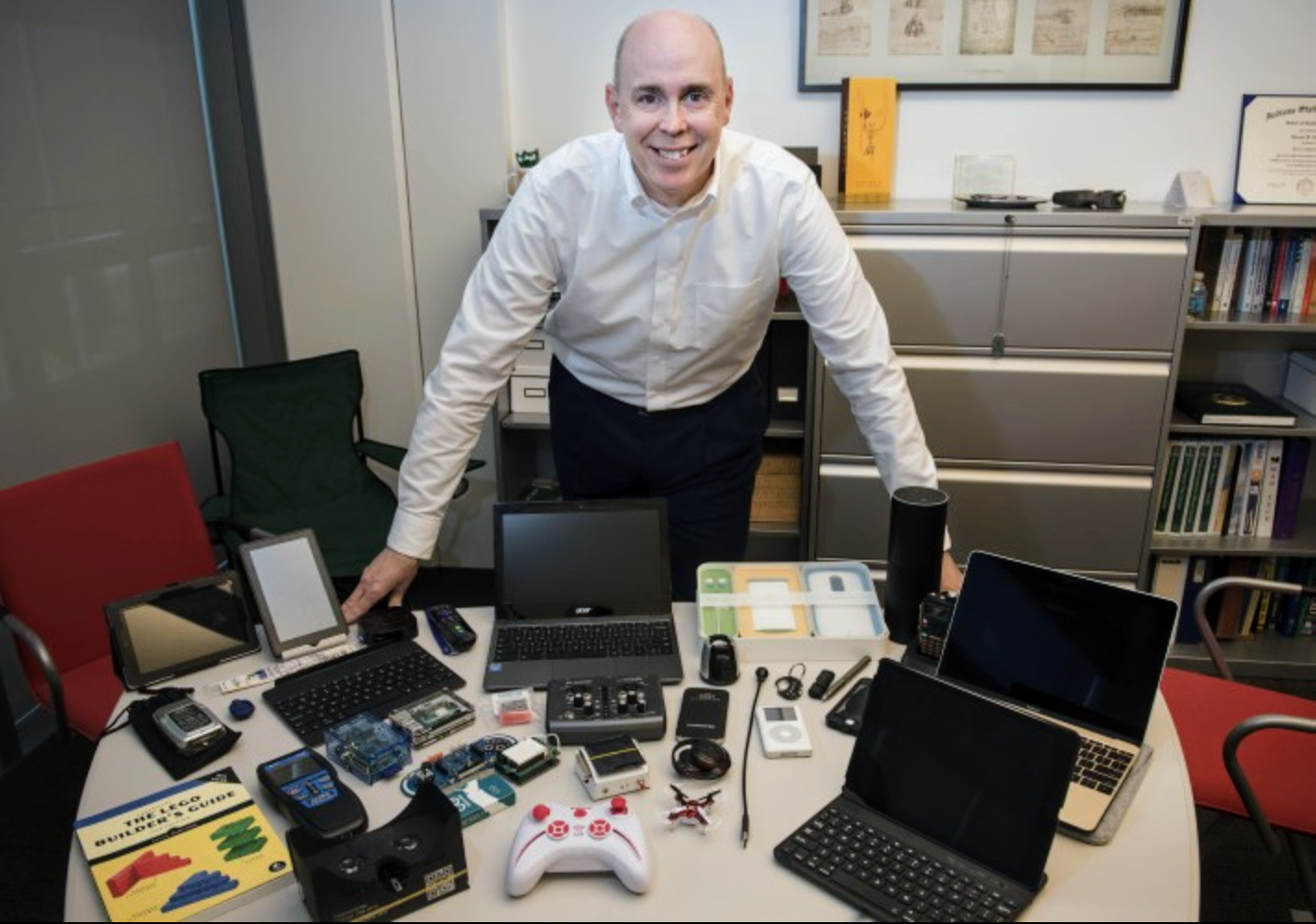 But he also receives some items as gifts and some companies are coming around to the idea that one of the best ways to promote their products is through blogs such as his.

One of those gifts that was reviewed was his own Father’s Day present from his family, a Syma X12S mini quadcopter, which flies by remote control.

It is a tiny drone that can be flown indoors or outdoors.

Before taking off on a business trip, Combs reviewed an option for a portable keyboard for his iPad Air.

And he reviews many options for iPhone cases, most recently new ones for the recently debuting iPhone 6.

But technology doesn’t stop there. He said such items are of use with the myriad of meetings a college president attends and the information he needs to retain.

Combs is fascinated by all kinds of design, but graphic design is a favorite. It’s also the field of study his daughter Katherine has chosen for the degree she is pursuing at Asbury College in Wilmore, Kentucky.

With his background in mechanical design, Combs began to incorporate sketches into his notes so images would trigger memories of important points from meetings.

By drawing images, such as a number or calendar, they trigger what he heard in the meeting, he said.

The perfect pen, with clean lines, is the finishing touch, he said.

He has added more to his draftsman tool box, incorporating color with stylized markers, which now travel with him on occasion.

What others might dismiss as doodling connects with Combs.

His to-do lists are color coordinated and marked by priority, keeping him on task, he said.

His technique has gotten noticed around campus, as he has seen students and staff pick up on the note-taking strategy. Combs smiles when he sees notebooks similar to his being carried around campus.

Combs said he enjoys taking technology and finding a new purpose for it.

For example, he took a first-generation Kindle Fire and employed a different operating system so he could use it for a remote control at home.

“Sometimes I go back and tear stuff apart just to see how much of it I can use,” he said.

He has been working to create a solar-powered Bluetooth wireless microphone, which he calls it a work in progress.

Combs said he hopes to become deeply involved in a Columbus Area Chamber of Commerce initiative about creating a space for entrepreneurs — the makers — and their ideas.

Chamber president Cindy Frey said she first noticed something different about Combs when she saw his different note-taking style — meticulous, blocky, much like an architect, she said.

Combs has become a valued partner with the chamber as it creates shared maker space for entrepreneurs and inventors. He has organized or participated in trips to see maker spaces in Lafayette and in Louisville, Kentucky, Frey said.

“There’s no pretense with him,” Frey said of his visits to the chamber, stopping in at the Fish Tank co-working and collaboration space to see how things were going, and to get some work done.

“If we had a maker space, he would be there every week,” Frey said.

“He’s really committed to helping people find their inner geek,” she said. “I have had people describe the maker spaces as YMCAs for nerds — and he’s looking for his tribe,” she said.